The tasting room sits on a rise overlooking the vineyard.

Bedell has, in effect, two tasting rooms, since all Corey Creek serves are Bedell wines, except for their own Gewürztraminer.  Corey Creek’s room is somewhat more rustic looking than Bedell’s, and there are nice picnic tables on the pretty grounds.  However, since we last tasted Bedell a year ago in August, it was time for a new tasting anyway.  (That’s what makes this such a challenging project—just when you think you’ve tasted every winery, you realize that another year has begun and they have new vintages.  As they say, it’s a tough job, but…)

We had the room to ourselves on a bright and sunny but slightly chilly September afternoon, except for some children whose parents were picnicking outside, and who came running in to use the rest room.  The two servers were friendly and chatty and quite well-informed, and we spent a pleasant time with them.

Corey Creek offers two tastings, plus wines by the glass or bottle.  The Estate tasting includes 5 wines for $12, and the Premium has 5 wines for $15.  Somewhat disappointingly for those looking to try a variety of wines, several of the wines are the same on each list.  However, our server had a good idea, and, since she had a bottle open anyway, gave us a taste of a different wine instead of one of the overlapping ones.  I’ve marked the wines which were only on the Premium tasting with an * so you can decide whether you want to invest the extra $3 to try them or not.  I would stick to the Estate tasting next time.

Both tastings include this wine, Corey Creek’s only offering of its own wine, as I noted above.  This has a bit of that cat pee smell Gewürztraminers sometimes have.  The taste is quite bracing, with lots of lime and tangelo, and is rather acid at the end.  Not a sweet Gewürztraminer!  It is good, though I like One Woman’s version better. 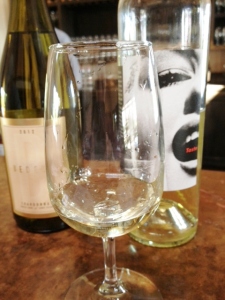 Note the snazzy bottle on the right.

This is, our server informs us, a blend of Chardonnay grapes from six separate plots, and is fermented half in oak and half in steel, so it avoids being either overly oaky or overly simple.  This has some nice tropical fruit flavors and the usual vanilla scent of oaked chards, but is not very complex.

I really like the label of this one, as it has an interesting image which reminds me of Marilyn Monroe.  This is a blend of 40% Sauvignon Blanc, 32% Viognier, 22% Chardonnay, 5% Gewürztraminer and 1% Riesling, and I enjoy sipping it.  It is nice and light, and would make a great summer aperitif, with some lemon-lime flavors that would complement seafood very nicely.

Again, both tastings get this wine, a blend of Merlot, Cabernet Franc, Cabernet Sauvignon, and Syrah.  With that information, you would expect this to be a rather complex rosé, but in fact it is just okay, and once again does not measure up to the Croteaux rosés, our gold standard for the North Fork.  It is, however, a perfectly fine rosé, with the typical strawberry aroma and tastes of papaya and peach.

You won’t find this on the menu, but noting our seriousness of demeanor and my careful note-taking, our server offers us this addition to our tasting.  As she says, this would make a great aperitif, and, as my husband notes, you could easily quaff a lot of this “and then fall over.”  It would be lovely with a strawberry floated in it, as it is relatively dry.  This is a “tank fermented” sparkler, but they also make a Méthode Champenoise sparkling wine, using the facilities at Sparkling Point. 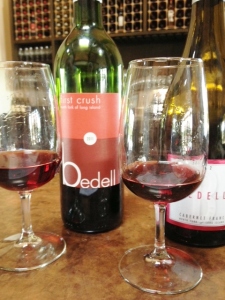 Now we switch to reds.  I’m thinking of picnics and roast chicken and a slightly chilled Beaujolais Nouveau as we discuss this wine.  It is fairly mellow, soft, and not very assertive, and would be good with a simple dinner.  Quite buyable.

Both tastings include this, my favorite so far, with lots of layers of taste, including blackberry.  Again, it is dry, but not too dry, and very pleasant to drink.

Rather than give both of us the Cab Franc, the server cleverly gives my husband this Merlot instead so we can try a different wine.  This is a fairly typical NoFo Merlot, with nice black cherry tastes and a short finish.

Lighter than I expect for a Malbec, this has lovely tastes of boysenberry, with some hints of cocoa.  Very good, though a bit pricey for how I would rate it.

A view inside the tasting room.

Reasons to visit:  Quiet rustic tasting room (buses, etc., by appointment); Bedell wines plus their own, so a good place to come if Bedell is crowded; the First Crush Red and the Taste White. 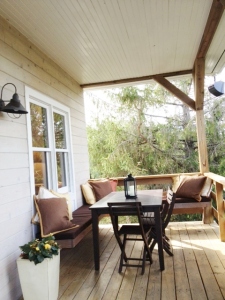 We could have had our tasting on this pretty porch.