In warmer weather, this courtyard might be a nice place to relax.

“Eric,” said our server, referring to Eric Fry, the winemaker for Lenz, “prefers a more austere style, with salty minerality.”  We agree.  If you want to understand the difference a winemaker’s choices can make, then you should definitely include Lenz in your tastings.  For example, back in October we tasted Pugliese’s 2010 Blanc de Noir Nature, a rosé made from pinot noir grapes, and at Lenz we tasted their 2014 Blanc de Noir, also made from pinot noir grapes.  Of course, they are different vintages, but look at the difference in taste:  my notes for Pugliese (just down the street from Lenz) note a vegetable taste and aroma, while my notes for Lenz highlight a smell of minerals and salt and mushed up fruit and a taste of red grapefruit.  Same grape, same “terroir,” different winemakers, different tastes.  Both, I might add, quite good. 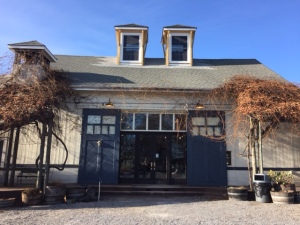 The Lenz tasting room is in an attractive wooden building with a long bar along one side and a nice array of wine-related gifts and art for sale along the other sides.  They have room for tables, but don’t have any, which might be a good addition, though I did note some picnic tables in the courtyard.  On this sunny winter Sunday, there were several small groups and couples at the bar, tasting the wines, chatting, and listening to the soft jazz and pop music on the sound system.  I heard Frank Sinatra, among others. 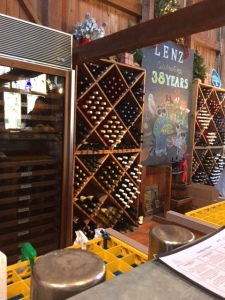 Some of their gift options

The tasting menu features an Estate tasting of five wines for $12 or a Premium tasting of five of their better wines for $15, plus a few additional wines available for individual tastes, such as their sparkling wine and the rosé.  Our enthusiastic and knowledgeable server suggested that he could also do an all white and/or all red tasting for us, and we decided that it would be perfect to share an all white and then an all red tasting.  Together the two were $27.

As I noted above, we smelled a salty minerality plus mushed up fruit (a description I’m sticking to, even if that’s not a “wine word”) and agreed that this is a very dry, French-style rosé with nice acidity and a citrusy taste like red grapefruit.  Though you wouldn’t want to sip it on its own, it would be a very nice summer aperitif with a cheese tray, especially if you had some brie and creamy goat cheese on it, perhaps from Catapano. 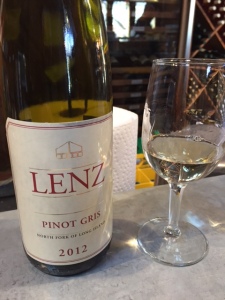 Our server describes the style of this white as “Alsatian, with no residual sugar.”  I get the idea of austere here also, as this is a very dry wine with a vegetal aroma and an almost cabbage-y taste.  My husband compares it to Brussels sprouts, one of his favorite vegetables.  Again, though not a sipping wine, this would go well with certain foods, such as a charcuterie platter.  Nice acidity.

And now, as they say, for something completely different.  2010 was a hot dry year, and, according to our server, a good year for gewürztraminer.  He may be onto something.  This is a delicious wine, with lots of aromas including lychees in syrup and tropical fruits.  This is again a dry wine, though gewürztraminers are often somewhat sweet, and it has some sweetness and a taste like roasted pear.  I observe that it would be perfect with turkey, and then flash on a memory of a number of years ago when we came to Lenz in order to buy several bottles of their gewürztraminer for Thanksgiving. 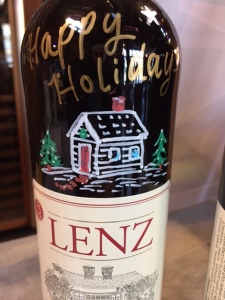 You can buy hand-decorated bottles to bring to a friend’s house.

Two years ago when we came here we bought a couple of bottles of their White Label Chard, which was $15 then, so it is quite the bargain now.  This is a steel-fermented chard, with an almost candy-like aroma and a dry, crisp, gooseberry taste, with a touch of pineapple.  You could sip this with or without food, and it would go with any white-wine friendly dish.

When Lenz says “old vines,” they’re not kidding, as they first planted their grapes in 1978, which makes them practically ancient by Long Island standards.  Our server says that Eric wants you to “taste the year,” so ages the wine in neutral oak barrels.  This is a good chardonnay to give someone who thinks they don’t like chardonnay, as it is a lovely wine.  The aroma is of peaches with some vanilla, and the taste is crisp and dry with just a bit of sweetness and a taste of not-quite-ripe pear. 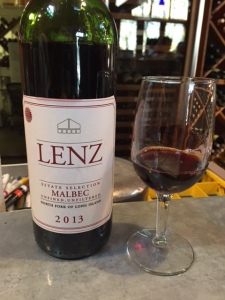 We get a fresh glass and switch to the reds.  This is a “pre-release” wine, not yet on the tasting menu.  Lots of wineries use Malbec in their blends, but not as many use it by itself.  The label notes it is “unfined and unfiltered,” as are several of their reds, which goes along with the philosophy on their website of trying not to interfere too much with the natural process of turning grapes into wine.  We smell lots of fruit aromas plus an undercurrent of something my husband describes as medicinal and I think of as Band-aids.  Mouth-watering taste, with lots of tannins, dry, with dark ripe prune plum taste.  Their tasting notes say chocolate, but I’m not getting that.  Yum.  Interesting wine.

Now I get chocolate—this one smells like those chocolate-covered cherries.  This is also good, with lots of dark fruit tastes and a nice acidity that would complement lamb very well.  The tasting menu mentions cedar, and my tasting buddy objects, “I hate eating cedar.”  Ha.  I do get some woodiness.  Not complex, but good enough that if we had room in our cellar we would buy some to hold for a couple of years. 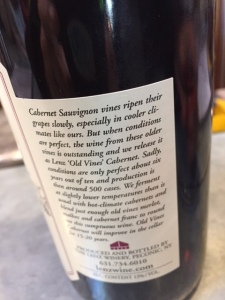 Unlike some places, the labels actually give you information about the wine.

This one also could use some aging, though it is already very good, with a slightly funky aroma that is mostly of red fruit.  As we sip we note a complexity, with layers of flavors, including raspberry and other dark fruits.  2010 was a good year for reds, and this one is no exception.

Though this is mostly merlot, it also has some cabernet franc and malbec and petit verdot in it.  We get the typical cherry aroma and taste of Long Island merlots.  Judging by the tannins, we think this could also age well.  Good.

Always fun to taste the same grape from different years to see how they compare.  Our server enthuses that the ’93 and ’97 merlots are still very good, noting that this one should also age well.  “Don’t drink it right away,” he warns, if you buy it.  We don’t—not convinced it is worth the price—but I think it would be hard to resist drinking it sooner than later, as it is another winner.  Aromas and tastes of chocolate and cherry and tobacco greet us, but it is not a “fruit bomb.”  Nicely dry.

You can see some of the paintings for sale, and also a sign on the beam that never fails to amuse my husband.

Reasons to visit:  a nicer than usual selection of gifts, including original paintings; a lovely calm setting and knowledgeable and enthusiastic servers; all the wines if you like them dry, but especially the Old Vines Gewürztraminer, the Old Vines Chardonnay, the Old Vines Cabernet Sauvignon, and the Old Vines Merlot. 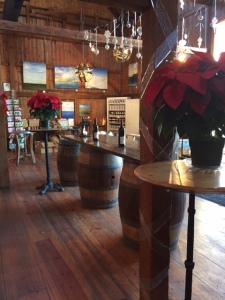 You can enter and exit the courtyard through this tunnel–or go around it! 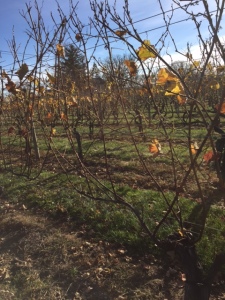 That time of year thou mayst in me behold/ When yellow leaves, or none, or few, do hang/Upon those boughs…