In warm weather, it is pleasant to sit on the patio. Plus you can bring your dog there.

The small, nicely decorated tasting room was almost full when we got there at 1:30, so we were concerned that we hadn’t made a reservation.  But the hostess showed us to a small table made from a wine barrel topped by glass, with high stools for seats.  By the time we left an hour later, every seat was taken, including the stools at the bar.  Well, there was music, by a pleasant duo called The Second Hands, and weekends are starting to get more crowded on the North Fork, but we were underwhelmed by the wines. 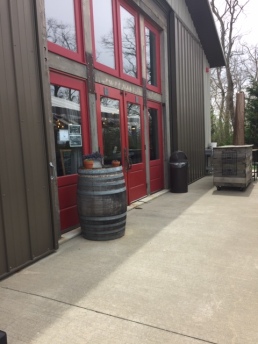 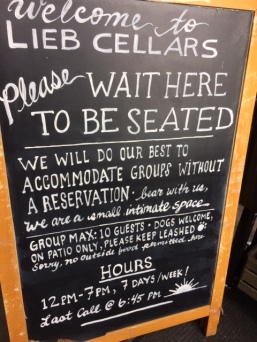 I remembered that the last time we had been there we had sat outside on the lovely patio overlooking rural Oregon Road, with one of my brothers and his wife, and my brother had characterized the merlot as “Kool-Ade wine.”  Still not an unjust description.

By the time we left, all the seats were taken.

The crowd seemed to skew slightly older than some other wineries, with larger groups sitting on comfortable couches around coffee tables.  Many people were getting snacks from the somewhat upscale menu of cheeses and meats and other nibbles.  A large party occupied a separate room, where they seemed to be getting some sort of wine tutorial or private tasting. 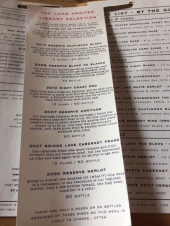 The menu offers three options:  four whites for $12, four reds for $15, or six Estate wines for $20.  As we perused the list, we noted that the white and red options included a number of the lower-priced Bridge Lane wines, which we had tasted at Lieb’s more casual tasting room on Cox Neck Road back in September, so we opted to share an Estate flight.  There’s also a list of higher priced wines only available as single tastes or glasses.

Our server brought us all six tastes on small round trays, clearly labeled as to variety and order of tasting, and gave a quick, almost robotic run through of their characteristics.  Though she checked back on us at regular intervals, my husband felt the lack of those wine discussions we so enjoy having.  One nice touch—they bring to each table a carafe of water and glasses, useful for palate cleansing.

Nice touch–fresh flowers on the tables.

(Note:  no outside food or drink.  Dogs are allowed on the outside patio, but not inside.) 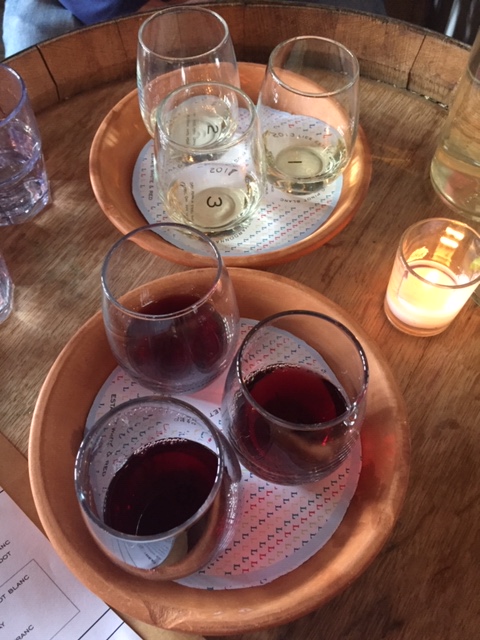 It’s always nice to start with a sparkling wine, since it sets a festive tone.  Our server informed us that it was “fermented in the bottle, in the traditional method.”  It was served so cold that at first we could barely taste it, so by the time it warmed up the nice little bubbles had mostly dissipated.  I don’t know whether the bottle had been open for a while, or whether the bubbles just don’t have much staying power.  The wine smells of metal and honeysuckle, with tastes of roasted pear, butterscotch or toast, and minerals.  It’s dry, so could go with charcuterie, but not tasty enough to go on its own for a toast.

This is our signature grape, our server announced.  I can see why.  This is a nice, very drinkable white.  The aroma I described as a combination of orange blossoms and asparagus is characterized in the tasting notes as lemon blossom.  Again, this is a dry wine, with some light citrus taste plus maybe gooseberries and, according to my tasting buddy, celery.  Also some minerality.  It could be good with lobster or seafood in a cream sauce.

Our server described this one as “70% oaked, with nice creaminess” so I was not looking forward to it, but the tasting notes on the tray said “neutral oak.”  Whew.  It was pretty strongly citrusy for an oaked chard, with aromas of pencil shavings (cedar, they say) and a touch of cat pee.  The notes also said melon, but I would say unripe melon. Definitely not the butterscotchiness you sometimes get with oaked chards. My husband liked it the best of the three, but I was not as pleased with it.  He thought it would go well with oysters, while I was thinking veal chops (though I’ve pretty much stopped eating veal).

Note the schedule of music events: though we were underwhelmed by the wines, it is still a nice place to sit and hear music.

This is the wine my brother described as “Kool-Ade.”  You get the merlot cherry aroma and taste, plus some nutmeg, but it is a soft, tanninless red with a flavor that evanesces.  The notes call it medium bodied, but I would say light.

We enjoyed the music of The Second Hand.

I would also call the cab light-bodied, with very slight tannins.  The aroma is slightly funky, with some scent of plums.  I described the taste as raspberry, but my pal said he would agree only if I twisted his arm and held him down.  Ouch.

As we hear at every NoFo winery that makes a petit verdot, we are told that this grape is most often used in blends, where it lends a nice rich color.  I happen to often like petit verdots, and this one is no exception.  In fact, I like it the best of the wines we tasted.  It has a lovely fruity aroma, and, though dry, has tastes of sweet dark fruits.  Again, short on tannins.  Anti-tannic, opines my husband.  However, if we were going to stay and have a glass of wine while listening to the music, this is the wine I would get.  Would it stand up to a steak?  I don’t think so. 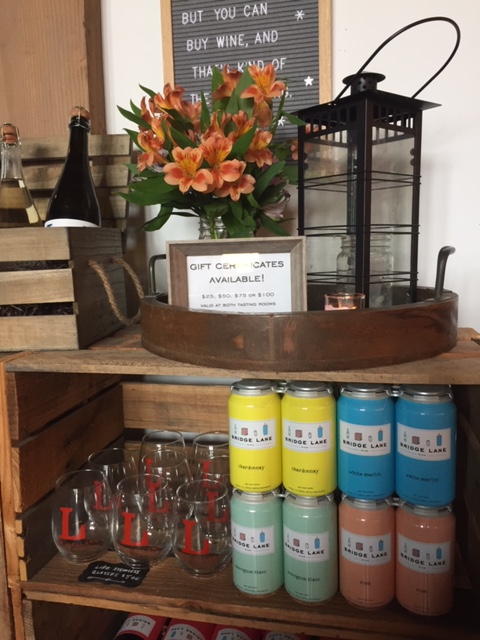 Cans of Bridge Lane wines are available for purchase. 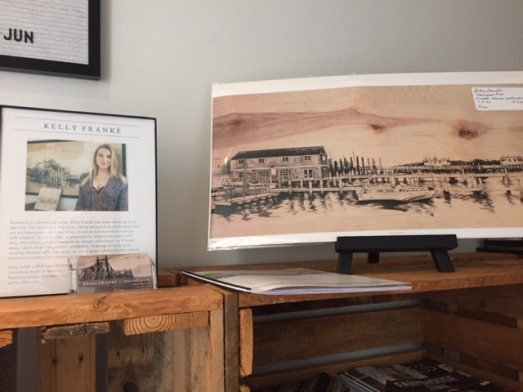 I almost missed the small display of local art.

Reasons to visit:  nice location on rural Oregon Road, with a pleasant outdoor space in warm weather and a classy tasting room; good menu of snacks; the Pinot Blanc and the Petit Verdot; you can also buy the reasonably priced Bridge Lane wines there, available in cans as well as bottles, etc.