Yes, we were just at Channing Daughters on September 14th, and we usually visit a winery once a year.  However, my brother and sister-in-law were visiting.  Like us, they are members of the Channing Daughters wine club, and they wanted to pick up both their regular shipment and an additional case of wines.  We were happy to make the trek over to the South Fork again, enjoying our ferry rides, a walk on the beach, and a stroll around Sag Harbor before heading to Scuttlehole Road.

A plus of a repeat visit to Channing Daughters is that they have so many different wines, plus six vermouths, that there was no danger of running out of wines to taste.  I don’t think any other winery on the East End does as many different, interesting, creative wines as they do.  We were also interested in getting some wine for the seafood dinner we planned for the next night, which would include my sister-in-law’s delicious scallop ceviche.  (After a trip to Braun’s, we added a main course of pan-fried blowfish tails.  Yum.)

This panorama barely begins to capture the impressive array of wines on offer at Channing Daughters.

The server recognized us, and we had a very friendly visit, which included chatting with various other visitors to the tasting room.  At the end, she gave us a loaf of Orwasher’s bread, which they get for free in exchange for giving Orwasher’s their leftover grape yeast for bread-making.  It went perfectly with the ceviche. 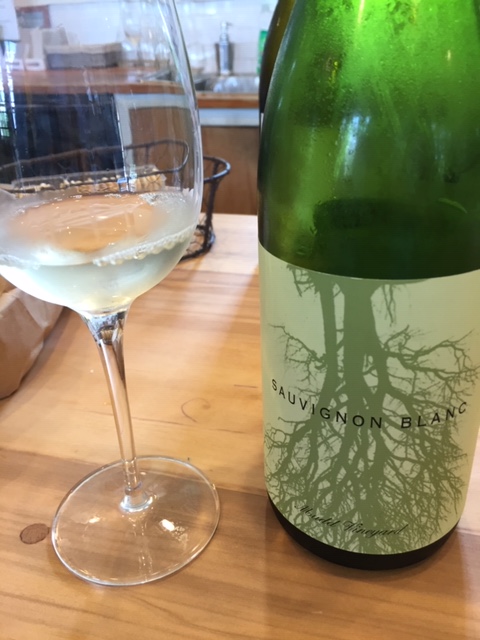 The grapes for this wine come from the Mudd vineyard on the North Fork.  We agreed that it was a good wine, “clean and green,” according to our tasting crew.  Lemony, crisp, and light, it is a perfect seafood wine. 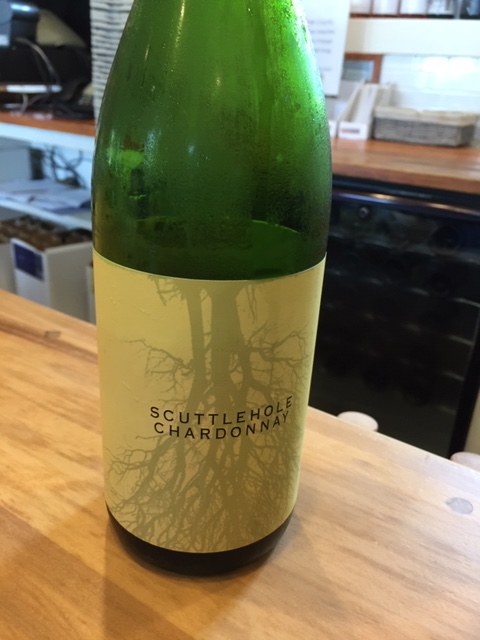 We first fell in love with Channing wines because of this chard, which we bought by the case for our daughter’s wedding.  Steel-fermented, it has aromas of honeysuckle and green apple with tastes of citrus, pineapple, and minerals.

“I just had this one a couple of weeks ago,” I said, planning to skip it until our server pointed out that I had tried the 2015 and this was the 2016.  Oh.  And yes, it is a bit different, with more taste of mango and more complexity, with a somewhat earthy end.  My sister-in-law described it at “roundy,” by which I think she meant it had no sharp edges.  Very nice.  As I recall, this was the one we decided to have with the ceviche, and it paired well.

The image on the bottle is of one of Walter Channing’s sculptures.

I was a bit hesitant about this one, since it is an oaked chard, and I often don’t like that buttery, vanilla taste.  However, this one is aged in neutral Slovenian oak and 18% steel, so it is not at all buttery.  Instead, we tasted pineapple and Mandarin orange, with just a touch of sweetness.  It can stand on its own as an aperitif, we agreed. 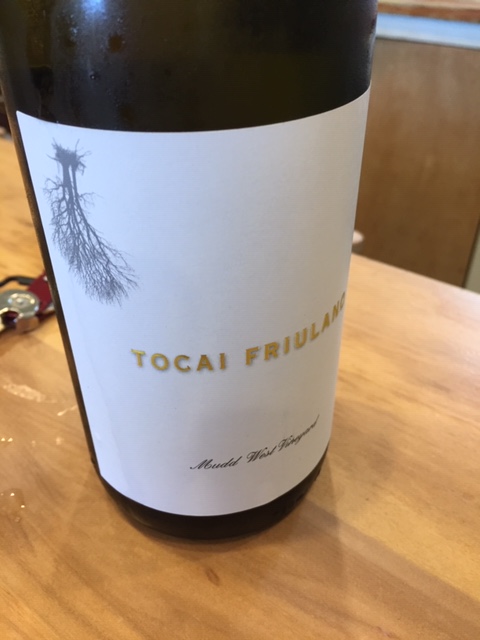 This one has aromas of caramel, earth, and pine.  The taste is very light and minerally, with a short finish.  Good with charcuterie, was the consensus opinion.

Then we decided to try one of the vermouths.  Oh no, insisted our server, you have to try them all!  She lined up six glasses on the bar and the four of us shared the six tastes.  Each one is inspired by a different season of the year and constellation of local herbs, vegetables, and fruits.  I can’t give a complete list, because the blends are secret, but I will say they are all good in different ways.  These are vermouths to sip over ice as an aperitif, though you could also make some interesting cocktails with them.  They are identified by number.

Vermouths made from white, rose, and red wines plus seasonal local herbs, vegetables, and fruits.

We were thinking about getting on the road again when my sister-in-law noted that we hadn’t tried any of their sparkling wines.  Out came three more glasses and the chance to taste three sparkling wines.  It really pays to be in the wine club!  My notes at this point are a bit sketchy (no surprise), especially because my husband was our designated driver and left most of our share of the tastings to me.

“Amazing,” said our relatives.  Very sparkly, with just a touch of sweetness.

“Just okay,” was the consensus.

I have extensive comments on this petillant naturel on my last blog, but I will just add that, though we are not normally fans of pink sparkling wines, this one is pleasantly drinkable.

There’s a small selection of wine-related gifts. I bought my brother and sister-in-law a stopper for closing sparkling wines, since we had discussed the problem of opening a sparkler for just two people.

Reasons to visit:  an amazing variety of wines, so you can come back frequently and try different ones; a wine club worth joining; a cozy tasting room where you can really engage with the servers and learn about the wines and the wine-making.