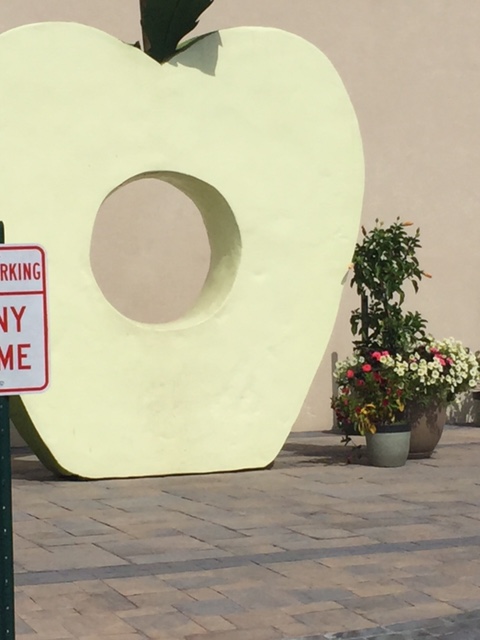 This giant apple marks the entrance to the Riverhead Cider House. 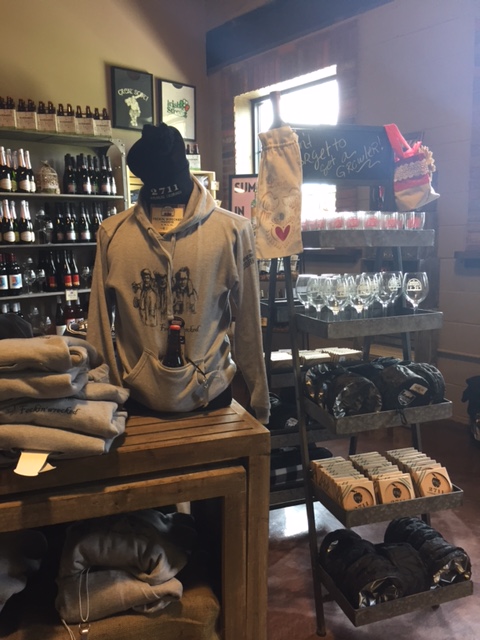 Shortly after we entered the cavernous tasting room at the newly opened Riverhead Cider House, we decided that we were not the target audience.  Then we tasted their wares, and were sure.  That being said, if you are a twenty-or-thirty-something heading East with a group of friends who like sweet-ish mildly alcoholic drinks or local beers, you might find the Cider House to be just what you’re looking for.  As you enter, you’ll see a smaller room off to the side that can be rented for parties and a small alcove where a gift shop is located.  Then you enter the large room lined on one side by a long bar and on the other by tables made from repurposed doors (knobs and all!) and tractor seats, plus more comfortable seating areas near the fireplaces.  Twin “dueling grand pianos” are in the center of the room, and guitars hang on the walls with notes encouraging their use.  Towards the far end is another alcove occupied by a café selling pizzas, salads, sandwiches, huge pretzels, and more.  Out the back is a patio with more seating and what has become a necessity for many tasting rooms, bean bag toss games. 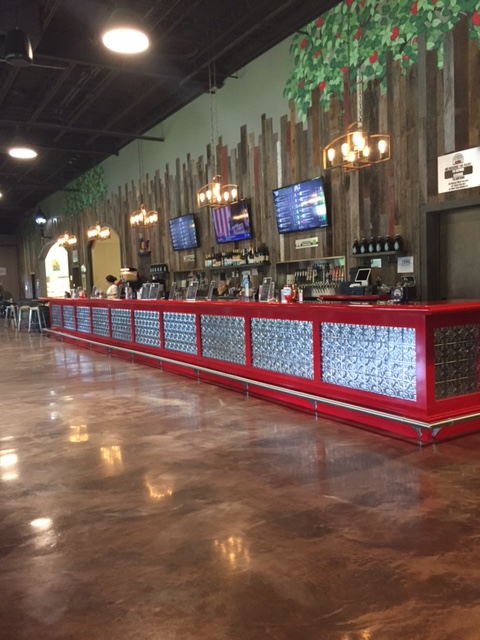 I would guess that on the weekends the bar is more crowded. 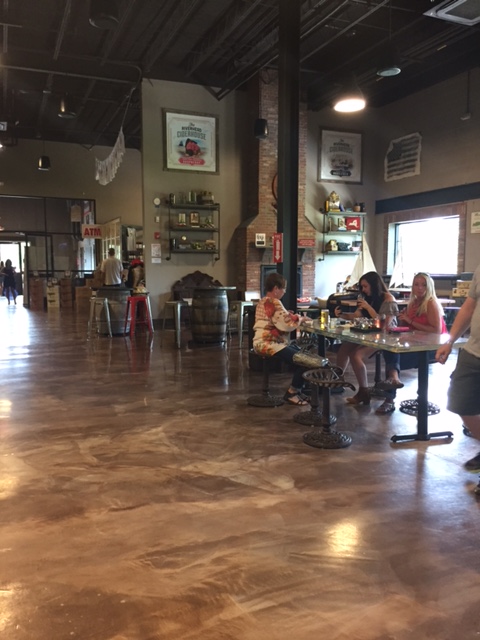 One view of the room. 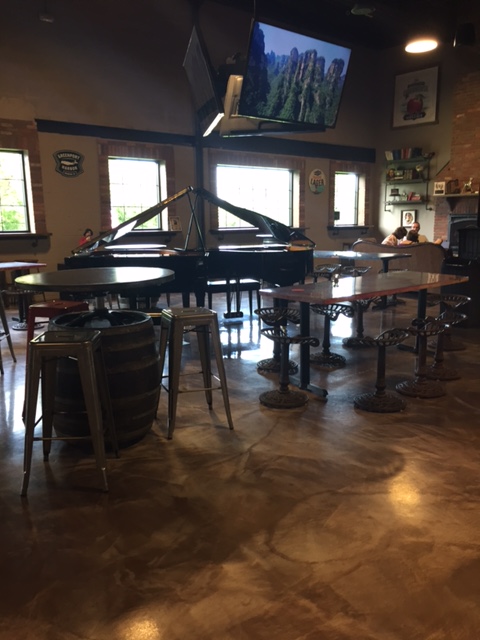 Another view, with the “dueling pianos.”

A huge sign over the bar lists the eight different hard cider flavors and the four local beers currently on tap.  As we were familiar with the beers, we decided to get two tastings of four ciders each:  what they call the Cider Master Flight, and then the other four, for $10 each foursome of two-ounce pours.  The server was quite friendly, but gave us no guidance as to the order of the tastings, which are served on a square tray, so we took them to our table and drank them in whatever order we pleased.  To accompany the tastings, we stopped into the café and bought one of their huge pretzels (and then another one, since the six of us—including two children—demolished the first in short order), which came with three dipping sauces, for $9.75. 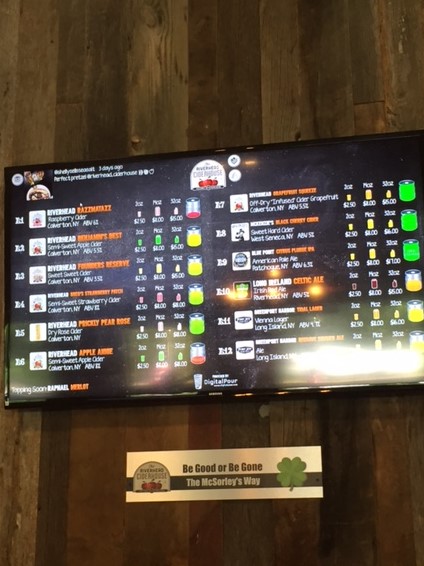 Our guests, who are fond of dry European hard ciders, and the two of us agreed that these were not serious ciders, but would be fine for those who like sweet fruity drinks.  We all went to the Woodside Cidery last year, and liked their ciders much better.  The children enjoyed playing on the patio (supervised by an adult, of course) and looking at some of the quirky décor, so this is one of the places you can come with children—but not with a picnic, as they forbid outside food. 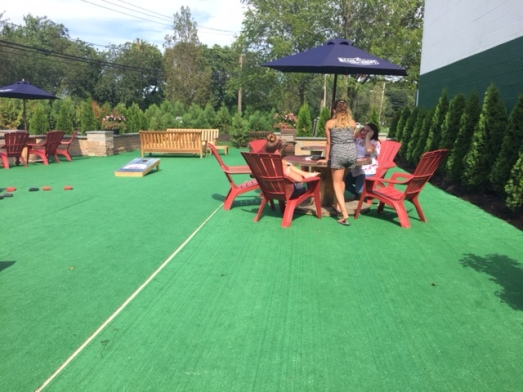 The patio, with the obligatory bean bag toss game.

You can also buy growlers of cider or beer to take home, at $8 for the bottle and $18 to have it filled.

The choices from the Cider Master Flight are marked with an *. 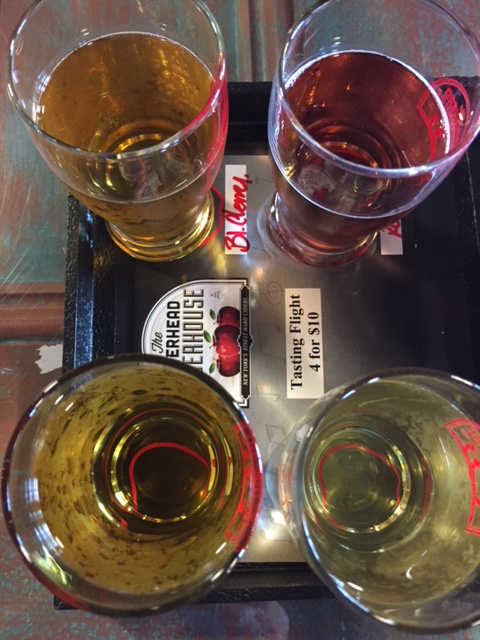 One of our flights, composed of the ciders that are not on the Master Flight.

Sweet.  Tastes like apple juice.  Maybe you could have this in a mixed drink with a spicy tequila. 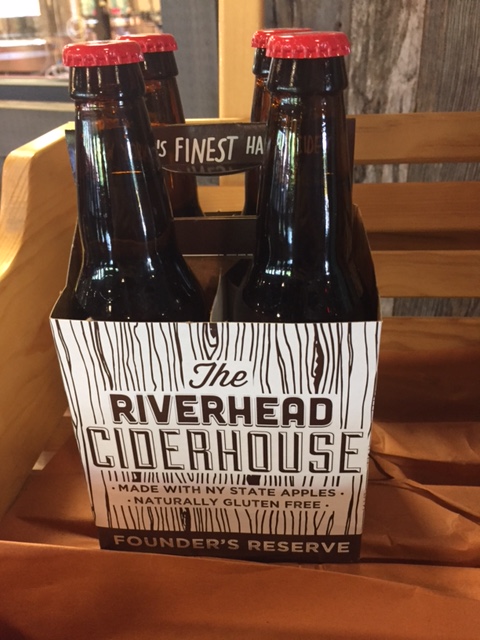 You can buy the ciders by the bottle in the gift shop.

A bit on the dry side, though I don’t think it tastes much like a rosé or like a prickly pear. 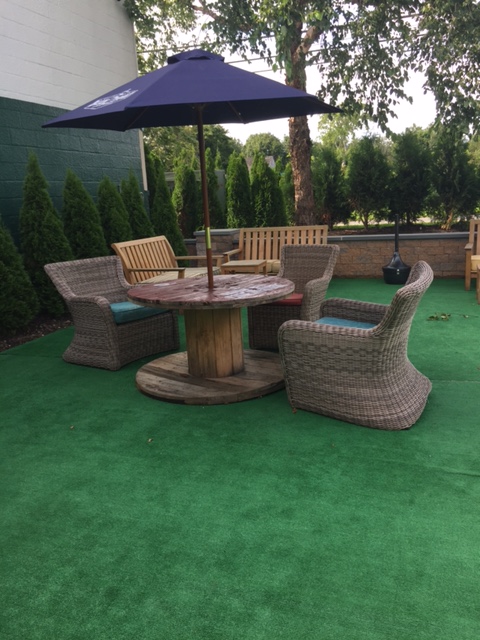 Seating on the patio.

If you like black cherry soda, get this one.  It even has a bit of fizz.  One of our guests, an excellent mixologist, thinks you could make a decent highball of this if you mixed it with bourbon and orange or angostura bitters. 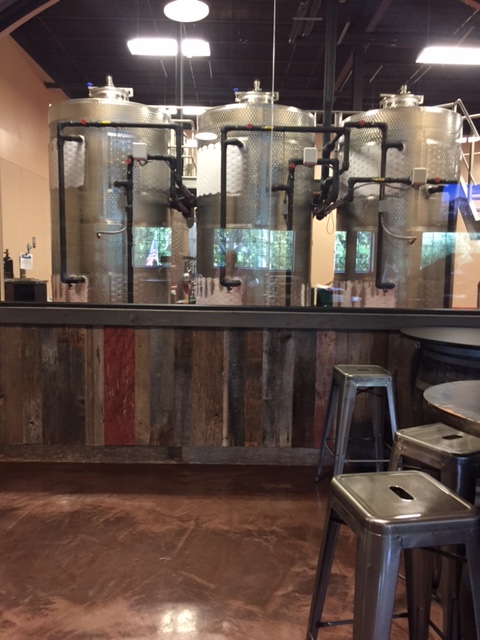 You can see into the room where they brew the ciders.

Continuing the soda theme, this one smells and tastes like raspberry soda, though it is not cloyingly sweet.

We agree that this smells remarkably like Lemon Pledge.  I don’t recall what Fresca tastes like, but one of our party opines that that is what this resembles. 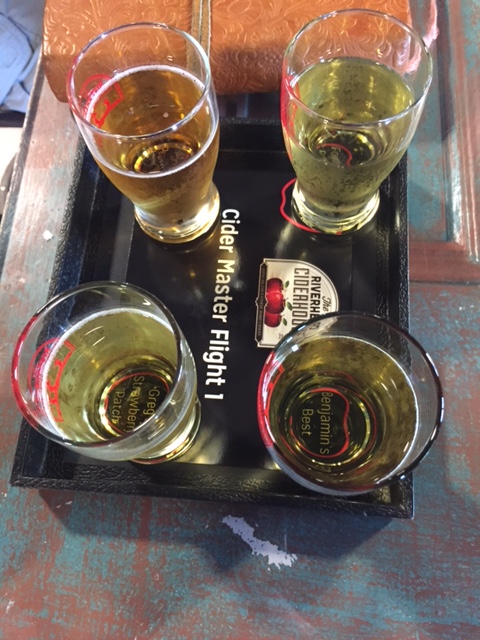 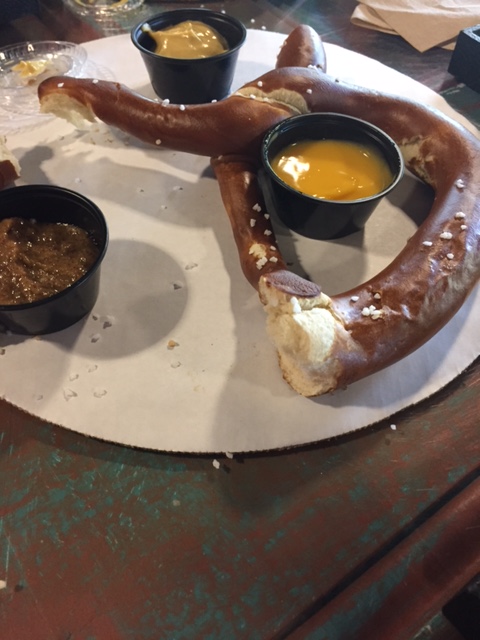 Our partially demolished pretzel. I liked both the cheese and one of the mustard sauces.

We like this the best—or dislike it the least!  It is more like a wine than the others, fairly dry, and tastes more like a European hard cider than the rest. 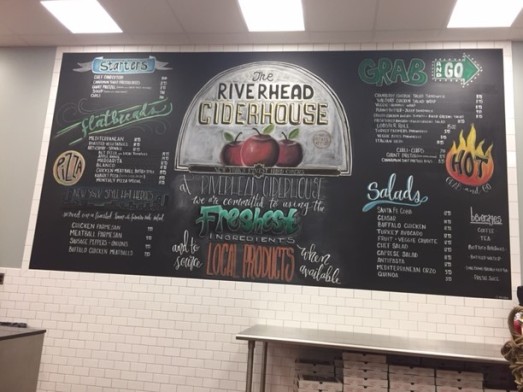 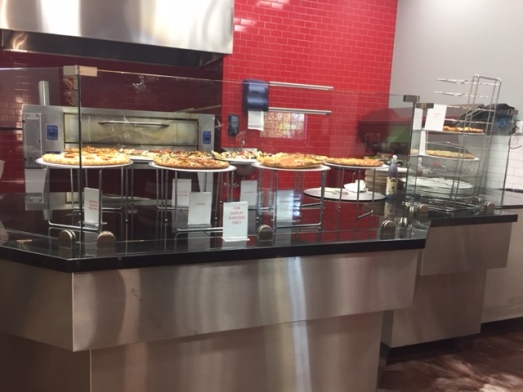 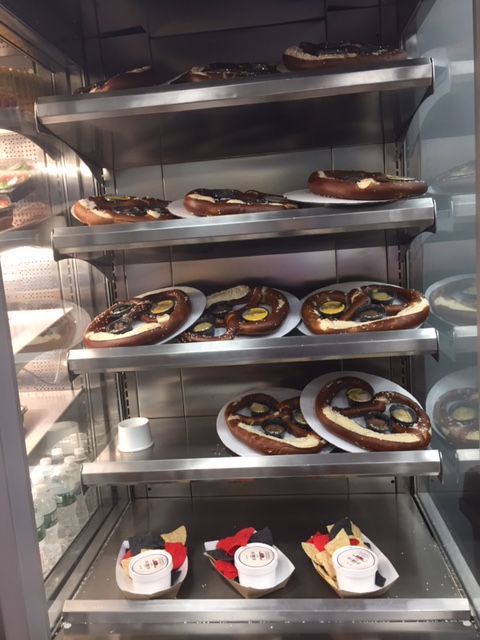 Reasons to visit:  you like sweet fruity alcoholic drinks; you are with a group and want to get pizza or huge pretzels and beer or cider; you want a place with a slightly funky vibe and a party atmosphere; the Benjamin’s Best. 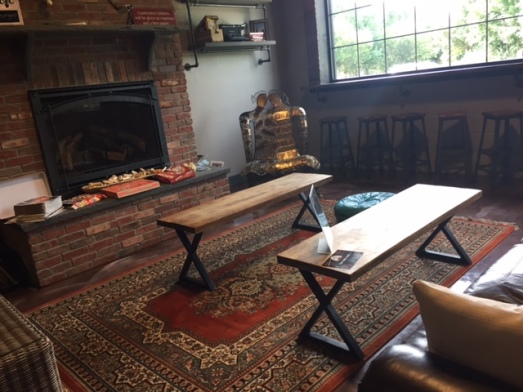 The fireplace area looks like it would be quite cozy in the winter. 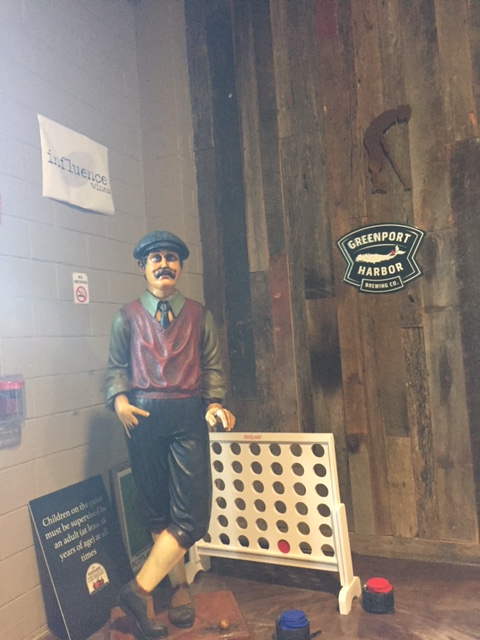 Not sure what the statue represents, but we did heed the sign next to it. 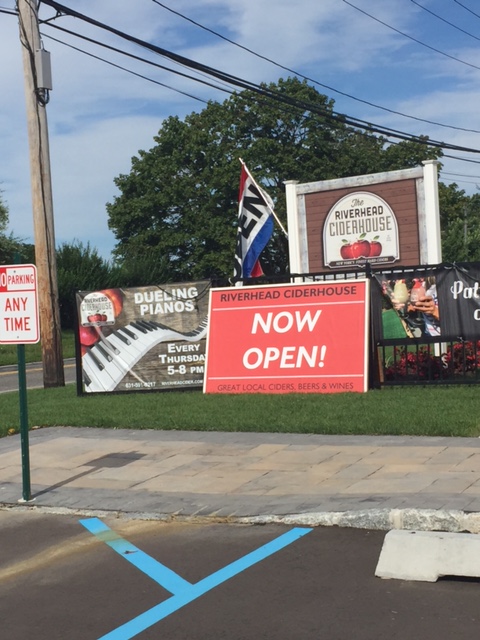