If you are heading to the North Fork hoping to make a stop at a brewery, I recommend you drive all the way to Greenport and go to the Greenport Harbor Brewing Company.  Bypass the Long Ireland Beer Company in Riverhead unless saving the cost of gas is your primary consideration.  Why?  Let me tell you about my experience at Long Ireland on a warm, sunny November Saturday afternoon.

We found the plain, industrial-style building on Pulaski Street fairly easily (you can just turn onto Pulaski from Main Road), and walked into the equally plain tasting room, packed with mostly twenty-somethings enjoying their beers.  If you just want a lot of beer for not much money, Long Ireland is a bargain.  For $8.00 you get a glass, which you may keep, which holds 3.5 ounces of beer, and you get to try six of their beers on tap.  A bowl of pretzels graces the bar.  They also offer pints for $5.00 and growlers for $15, for most of the offerings, as well as bottles for a few of the beers for $6.

When we finally got the attention of the server—to be fair, there were a fair number of people for two servers to keep up with—we told her we wanted to do a tasting.  “Okay,” she said, plunking two glasses down in front of us.  “How does it work?”  I asked.  “Is there any order to the tastes?”

“What can you tell me about the beers?”  I asked, in a vain attempt to figure out which to get.  For an answer, she pointed me to a list of available beers, eleven in all, with the only information on the sheet being the alcoholic content.  I overheard one customer saying to her friend, “Which has the most alcohol?”  Not really my concern.  So we decided in order to get to try all the types we would each get a full tasting, sharing tastes as we went.  Then two choices were deleted.  So we ended up with ten tastes in all, plus one repeat for both of us. At no time did either server tell us anything about the wide variety of beers on offer.

This is a fairly classic ale, not very exciting, not particularly hoppy or interesting, but an okay basic beer.  By the way, in case you haven’t noticed already, there is a definite Irish theme, with Celtic symbols on the taps.

I don’t know why this is a “winter” ale, but it has a slightly darker color than the Celtic Ale and some citrus notes, though it is a thin-tasting beer.  Both of these are available in bottles.

Not on the menu, this one is only available in bottles, and the server opened a bottle and then gave everyone in the room a small taste of it.  We thought it was a good summer beer, very fresh tasting. 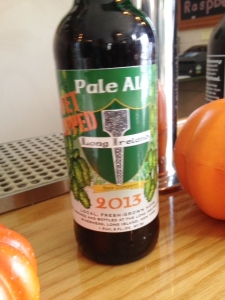 The taste of this one reminded me of the very ripe grilled pineapple we made for dessert a few weeks ago.  Not very hoppy, it is on the light side of a German-style beer.

Inevitable at this season.  Did I want it with a cinnamon sugar rim?  Oh, yes.  Good choice.  The beer itself is just okay, but with the rim it is quite enjoyable.  Like drinking dessert.

The special glass for the pumpkin ale, with a cinnamon sugar rim, which is not the tasting glass.

Do you like Corona?  This has a bit more taste than Corona, but still could have benefitted from a lime.  I wanted to ask about the name, but gave up getting the server’s attention.

Though the initials stand for Extra Special Bitter, this is not particularly bitter.  It is like an English bitter, which we came to enjoy on our first visit to England during a warm summer week, when we realized that the bitters tended to be cooler than the other beers on tap.  You can taste the hops in this one, and also a slight wheaty-pancakey flavor.

We seem to have reached the initials part of the menu.  India Pale Ale is what these initials stand for, and it is my favorite so far.  On the blackboard it ways “West Coast Style,” but no one tells me what that means.  I’d be happy to drink this with a burger.  This one is also available in a bottle.

Hmmm…sort of funky, a bit of dank cellar, but actually not bad.  It would be good with a sweetish barbecue sauce on ribs.  If you buy this one in a bottle or growler, it costs more than the others.

Back before coffee became the universal breakfast drink, people started the day with some form of alcoholic drink, usually beer or hard cider, both more reliably germ-free than water.  I would guess this is an homage to that custom.  I’m startled by the strong coffee taste, and when I go on Long Ireland’s web site I discover that it is actually made with coffee—and also flaked oats and milk sugar.  Breakfast, indeed.  You could have a pint of this in a cozy pub and enjoy drinking it on its own, though it is certainly no competition for Guinness.

If you’re counting, you realize we should have two more tastes here, but two choices have been taken off the board, so we both opt to end with the Pumpkin Ale, which is at least fun to drink.  Oh, and the servers do rinse your glass with the new taste as a transition between beers, a nice touch. 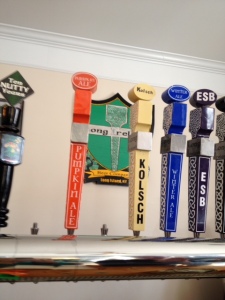 Really none, unless you are determined to go to a beer tasting and you don’t have to time to go to Greenport.  On the other hand, you do get a fair amount of beer for not much money.