The news was threatening an apocalyptic storm, so after a trip to the supermarket for a few essentials (milk, bread, toilet paper, and guacamole ingredients) we headed to Pellegrini to pick up our wine club shipment.  When I looked in my notebook, I realized that, although we had been to Pellegrini many times and sampled wines, we hadn’t done a recorded tasting since 2016.  As wine club members, we can do free tastings at any time, and since pick-ups happen four times a year, we often combine picking up our three bottles of red with either a glass of something or a full tasting. 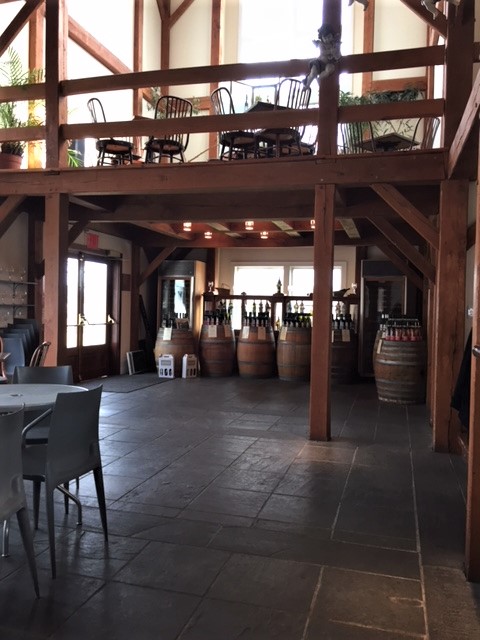 The tasting room is not huge, but certainly adequate in the winter.

We chose the reds because Pellegrini does a better-than-North-Fork-average with them, though we like some of their whites as well.  We also like Pellegrini because it is a pleasant setting in which to taste wine.  Though the tasting room itself is small, there’s plenty of room in and around the courtyard, where we have often sat in the summer.  It is a good place to bring guests because you can get your whole tasting on a tray and bring it to a table, where you can share snacks you’ve brought with you.  The only food they sell is North Fork chocolate, though they do include a little bag of oyster crackers with each tasting.

They have a few tasting options, but the main ones are either three one-ounce pours at the bar for $8 or three two-ounce pours which you take to a table on a tray for $14.  The latter option also includes a one-ounce pour of a wine they select, which this time was their rosé.  When you get there, they hand you a menu on which you circle your three choices out of a possible fourteen wines.  My husband and I decided to do three whites and three reds for our two tastings, sharing them, as usual.  The room was empty on this winter mid-week day, so we opted to take our trays to a table by the window where we could take our time and chat as we sipped.

Pellegrini was having a good sale on their rosés, so though we prefer Croteaux, we decided to get the three bottles for $33.

This is a very pale pink rosé, with the typical strawberry aroma, plus a touch of petrol or some chemical.  It is made from a blend of 66% cabernet franc, 24% cabernet sauvignon, and 20% merlot.  Compared to Croteaux rosés, it is very light, almost more like a sauvignon blanc than a rosé.  It is very dry, and drinkable but not one you would want to sip by itself.  It could go with charcuterie.

I find gewürztraminers a little tricky, since sometimes I like them and other times I find them too sweet.  I would hesitate to buy a gewürztraminer or a riesling I didn’t know.  This one smells, I assert, “gewurzty”—floral, perfumey, ferny.  I like the taste, which reminds me of ripe pineapple with a touch of lemon.  Despite all the fruitiness, it has only a touch of sweetness, with a nice long finish.  My tasting buddy suggest pairing it with mac and cheese, and I counter with weisswurst, since it is after all a German grape.

Our tray of whites. As you can see, the rosé, in the upper right corner, is almost as pale as the whites.

Though they have a couple of oaked chardonnays, I opt for the steel-fermented one, since I generally tend to prefer steel over oak.  This one smells like honeysuckle and fruit salad, but the taste is very minerally, with not much citrus, and some green apple.  It is so dry that some might find it harsh.  Though it is not a sipper, I could see drinking it with something like a barbequed salmon burger.

Pellegrini often has special sales. Today they had one on the chardonnay and one on the rosé. We opted to get the rosé.

Because we’re not standing at the bar, I can’t ask about the origin of this name, but since it is a blend—of 58%chardonnay and 42% sauvignon blanc—I assume they had to give it a non-grape name.  In any event, we like it.  The aroma is lovely, with notes of pine needles and forest and what I insist is sweat (which doesn’t sound so good, but I liked it).  It does not taste at all like the smell, notes my husband, saying it is more like lime than lemon.  It is a good food wine, and if he catches any bluefish next summer (or we buy some at Braun’s) I may get a bottle to go with it.

The vines are bare now, but spring is coming. My chives are starting to grow.

Now we switch to the reds, which, because they have been sitting on our tray for half an hour, are at perfect room temperature.  This merlot is in our shipment, so we are interested to try it.  It is actually a bit of a blend, 90% merlot plus 7% cabernet sauvignon and 3% cabernet franc.  It is a nice, not atypical Long Island merlot, with dark cherry aroma and flavor, more soft than tannic, with not a lot of fruit and some mineral and salt flavors.  We like it, but more as a picnic red than as one to stand up to red meats.  We decide that when we get home we will label it for drinking this year, rather than holding on to it for any length of time.

“Not a killer cab,” opines my drinking pal, though he also says it is a pleasant wine.  It is aged 19 months in oak, and has an aroma of dark fruit and tastes of ripe purple plums.  It may not be hefty enough at this point to go with a steak, but one could certainly pair it with pork or lamb chops.  It has enough tannins that we decide to label it for a year from now when we stow away our wine club selections.

I have high hopes for this wine, since 2012 was a good year for reds on the North Fork and I often like petit verdot, and I am not disappointed.  Yum.  The aroma is like macerated raspberries, and it tastes like black raspberries.  It is dry, with lots of tannins, and could definitely stand up to a steak.  Their website describes the taste as “dark and brooding.”  I don’t know about that, since I never saw a wine brood, but we like it. 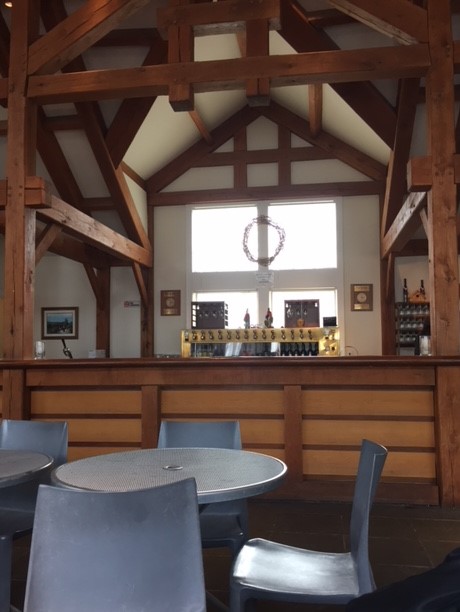 In the summer I often try to angle my photos so I don’t include too many people. Not a problem today!

Reasons to visit:  pleasant tasting room with ample outside space for summer tastings; outside food is allowed, so you can bring your own snacks; you can bring the tastings to a table so it is a nice place to sit with friends; the gewürztraminer, the Rejoyce, the cabernet sauvignon, the petit verdot.  One note on the tray of tastes—in general, you want to go from whites to reds, and from top to bottom and from left to right.

We’ve often been here when they were setting up for weddings in the courtyard, when it is covered with a white tent.