A glass of wine and some pleasant music add up to a civilized way to spend a couple of hours.

There’s something pleasantly civilized about sitting comfortably on a cool spring afternoon, with a glass of wine in hand, listening to live music.  A number of wineries offer live music, especially on the weekends.  Though Live on the Vine is a winter phenomenon, there’s plenty of opportunities to hear live music at other times of the year.

I’ve signed up for several winery email lists, and so I had a message in my inbox about Clovis Point’s current music offerings.  Having nothing else to do on Saturday, we drove over to Clovis, ordered glasses of cabernet franc (see my tasting write-up from January 4, 2019, so see why that was our choice), and settled on their plastic-walled porch.

A view of the porch where we sat.

We were lucky to have seats, since, as we learned after we arrived, many of the tables had been reserved.  As more people arrived, the Clovis people quickly set up outdoor tables in the grass just outside the porch.  If we go again, I would make a reservation and be sure to bring some snacks.  Every other table seemed to be enjoying snacks, from chips and dip to cheese and crackers to a whole pizza (though the web site specifies no coolers and no outside alcohol).  The winery also has a menu of nibbles.

The performer was a singer/guitarist whose stage name is Teacherman.  (He’s actually an English teacher named Dave Goldman.)  We enjoyed his set, which included songs by Billy Joel, the Beatles, and the Eagles, among others.

If you’re interested in a similar experience, I suggest you check out the websites of any wineries you like to see if they have music scheduled.  I’ve noticed that Baiting Hollow and Martha Clara often offer music. 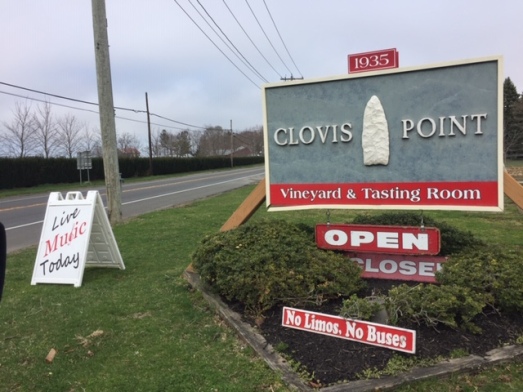 Just like my last entry, this one also has a link to Long Island history.  However, instead of going back to the 19th century, this one goes back about 10,000 years, to when the people who lived on Long Island hunted woolly mammoths with stone tools, like the clovis point used by this winery as its name and symbol.

On a brisk but beautiful November day we continued our recovery from hurricane Sandy with a visit to this winery.  When we pulled into the parking lot, we were at first a bit concerned by the presence of two large buses and a limo, but when we entered the attractive converted barn serving as a tasting room we were relieved to note that one large party was out on the lawn and another in the awninged side veranda, and there was room at the tasting bar.  A band called the Earthtones was playing folk rock, a bit too loudly for our taste, but the music was pleasant, and we also enjoyed looking at the paintings of local scenes on the walls (all for sale, some at very reasonable prices).  They also have cheese trays and chocolate pairings available for about $10.

There are three tasting menu options, plus of course wines by the glass and bottle, which we saw several groups doing.  You can have the “Cold” tasting, three whites and one rose for $8; the Reds, four reds for $10; or the Premium, also all reds, for $14.  We opted for one Cold and one Premium, planning to share as usual.

According to our well-informed server, all their whites tend to the light and bright side.  This steel-fermented chard is light, with a lemon aroma, and a taste that reminds us of lemon candy.  A bit too sweet for us, but if you like your chards on the sweet side you might like this one.  It contains 1.3% Gewurtzraminer, which might account for some of the sweetness.

However, this chard also has 1% Gewurtz, and yet is quite different.  The aroma is somewhat like chamomile tea, and though it is also steel-fermented it is quite mellow, with some notes of honey, and nice legs.  Buyable!  This would be a pleasant sipping wine, and the server points out that it won a gold medal.  We discuss how interesting it is that essentially the same grapes can have such different tastes.

So this is their oaked chard, having spent 10 months in oak barrels.   It has a somewhat off-putting smell of rotten wood, though the taste is fine.  As it sits in my mouth, I taste vanilla, oak, and burnt pear.  Though not unpleasant, I don’t particularly care for it.  As we discuss it, the server gives us a taste of the 2009 Barrel Chardonnay for comparison.  What a difference!  We like this one much better, with tastes of butterscotch and refreshing citrus.  This also spent 10 months in oak.

Made from cabernet franc grapes which spent three days on the skins, this is a pleasant rose with tastes and aromas of watermelon and strawberry, and would make a nice summer sipping wine.  I could see having it well iced with a few strawberries in it.

Now we move on to the Premium tasting, for which we get a clean glass, always a nice touch.  We also notice that those who buy a few bottles of wine get an attractive cloth bag to carry them in. (And if you buy three bottles, the tasting is free.)

Our server characterizes this as “European style,” and notes that it won a silver medal.  The aroma is “forest,” we decide, some fruit, some oak, a bit of smoke.  The taste is good, with dark cherry fruit and also a bit of smoke and oak.  This, we decide, is buyable.

Though primarily cab sauv, this wine also has 2% merlot and 2% cab franc, and 07 was only the second year they made it.   This is also a good and buyable wine, with an aroma of cedar and berries and tastes of red plum.  The tannins are soft, and it is easy to drink.  I think I’d like it with duck, but not in any kind of complex sauce.

Again a blend, the merlot is 85% merlot, 6.5% cab sauv, 2.5% syrah, and 1% petit verdot.  This one also won a medal, this time double gold, we are told, and that it is called “select” rather than “reserve” because they are saving the term “reserve” for really exceptional wines.  An aroma of smoke and coffee preceeds a somewhat odd but pleasant flavor I think tastes like lychee fruit.

How did this blend of merlot, cab sauv, cab franc, petit verdot and syrah get this name?  They had a contest, with the wine club members voting on the anonymously contributed names.  As it happened, this was the name the owner submitted…The aroma has some of that earthy terroir, and also black fruits.  The wine is fairly dry, with nice fruit and is good, but not worth the $60.  However, if you join the wine club it is only $40, and at that price would be worthwhile!