We almost missed the entrance!

Thanks to Google Maps, we had no trouble finding Moustache Brewery, hidden away on a side street in Riverhead in an industrial area.  Once inside the industrial vibe continued, with the small tasting room open to the brewing facility and stacks of materials on open shelves.  The small size also encouraged a friendly attitude, as we got into conversations with a couple sharing our table and various individuals, some of whom had clearly stopped in for a pint.  Matthew and Lauri (as the owners are identified on the web site) are also quite friendly, and clearly passionate about their beer, and with good reason.  We liked all of the beers we tried.

The tasting flight gives you four 5-ounce pours for $8.00, so though we would have liked to try all the beers we decided to share one flight, which was more than enough.  Maybe we should go back and try the rest another day!  Their beers are also available on tap at various places around Long Island, and I wouldn’t hesitate to order them.  They also have a small selection of beer-themed gift items.  Pints are $6 and growlers (to go only) are $21-$22, depending on the beer (less if you bring your own growler bottle—even if it’s from a competing brewery).

While we were there two young-looking couples came in asking for flights, but when they were unable to provide proof of age they were denied and left in a huff, declaiming that they were off to Long Ireland Brewery.  Lauri quickly phoned Long Ireland to give them a heads up, which I thought was very collegial of her, and also smart.  Why jeopardize your livelihood to give someone a drink?

The menu accurately describes this as “light bodied with chocolate and coffee notes.”  We agree that it is light for a porter, so it is good for someone who wants to start trying darker beers but is not ready for a really heavy one.  This has a pleasantly bitter flavor with a touch of citrus at the end and a bit of a tingle on the tongue.  I say that I could see sipping this in a pub, and my husband agrees, but adds that in that case it would be warmer.

Okay, where did this name come from?  Lauri chuckles and admits that it was named for her tendency to, um, use strong language.  “Potty mouth” would not be a good name for a beer, we all agree.  This is a good IPA, with a strongly piney taste and more lime than lemon in the citrus category.  It would go well with a summer barbeque, especially if you were having ribs with a sauce that was more on the sweet side.

Halfway through our tasting.

“Local Cascade, Mt. Hood, and Pearle Hops” reads the menu, and yes, it is somewhat hoppy.  Saison means it is in the Belgian style, and we find it lighter in taste that one would expect from the dark color.  It is also pleasantly bitter, but not as interesting as we had hoped.  Still, it was fine.

This is described as “Rye Scotch Ale,” referring not to whiskey but to the Scottish style of brewing and to the use of fermented rye.  And indeed, this is another beer we could definitely imagine ourselves drinking in a cozy wainscoted pub somewhere in the north of the British Isles.  Although again it is not very heavy (I should mention that we both love Guinness Stout.), it has lovely notes of mocha—chocolate and coffee—and is very drinkable.

You’ll Shoot Your Rye Out

Reasons to Visit:  all the beers were good; you could fill a growler and enjoy some good craft beer at home; you’re in Riverhead and you would like to try a tasting somewhere new; the friendly vibe. 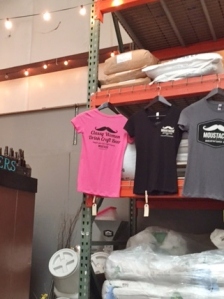 Also, if you happen to find yourself in Riverhead on a Saturday you should definitely check out the Farmer’s Market.  We bought locally caught cod, shiitake mushrooms from the East End Mushroom Company, organic hydroponic greens, some delicious olive bread, a lovely soft brie-type cheese from Mecox Dairy, and delectable mini chocolate-covered red velvet cakes, and made a terrific dinner.  Next time we hope to try the quail from the Browder’s Birds stall, raised by Abra Morawiec. 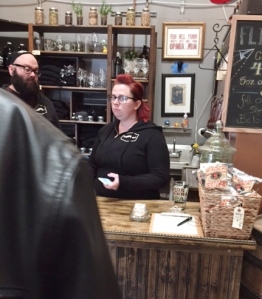 The view from the tasting room into the brewery. 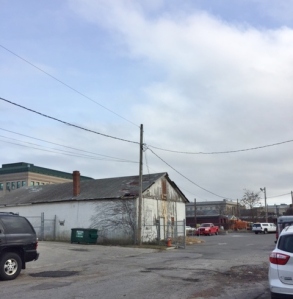 Out of the way, industrial location for Moustache Brewery. 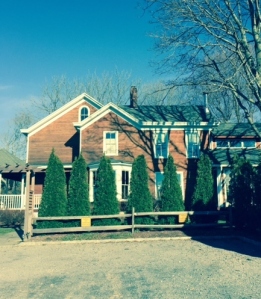 The Farmhouse B & B

As we drove slowly along Oregon Road I began humming “Country roads, take me home…”  We had just paid our first of what I hope will be many visits to the East End Mushroom Company, and two baskets of mushrooms sat in the back seat, awaiting culinary inspiration.  Meanwhile, we were enjoying the bucolic scenery along Oregon Road, on our way back to Shinn’s tasting room after more than a year away. 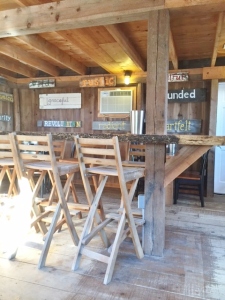 I like the cozy rustic look of the tasting room, and today we had it to ourselves for a while, and then later a few other small groups arrived.  No buses are allowed here, and limos or groups of more than six by appointment only, which makes sense, given the small room.  Check out their web site for info on their B and B in the adjoining farmhouse.

But we are here to taste some wine.  The menu offers four wines for $14 out of a menu of 16, plus a few other choices which cost $7 per taste, including their brandy, about which more later.  We decided to do one tasting of whites and another of reds, not sharing tastes because I have a bit of a cold.  I’ll tell you about the whites first, then the reds.  We sit at a small table for two and are served each wine as we choose it.

Given the festive season, I decided to start with their sparkling wine, made in the Méthode Champenoise and fermented in the bottle.  The first pour is from a bottle that has been open and is clearly somewhat flat, so our server quickly opens a fresh bottle.  Ah, nice frothy bubbles!  Typical yeasty aroma, then a nice dry light taste, with good acidity.  I recently learned that acidity is what makes your mouth water, and this one does.  I like it better than Sparkling Pointe’s sparklers. 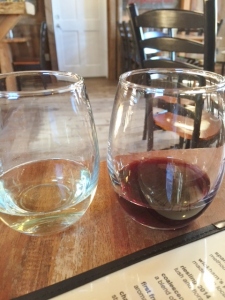 I liked the glasses.

I liked Coalescence, a blend of sauvignon blanc, chardonnay, and a touch of riesling, the first time I had it, then didn’t care for it the second time, and now I have to say third time is not the charm.  Although it has a pleasant aroma of gooseberry and honey, the taste has a funky forest floor edge that does not appeal to me.  Not that it’s bad, and I think it would be nice with a plate of salumi, but it’s just not for me.

I’m happy that the server gives me a new glass, since I don’t want the taste of Coalescence to influence the next one, which turns out to be a happy choice, since I like it very much.  This wine spends eleven months in new oak, we are informed, and it has a bit of that oaky vanilla scent.  However, the taste is quite nice, with some interesting layers of flavor, a bit tingly on the tongue.  It has just a touch of sweetness, especially at the end, and is sippable on its own, but would be even better with some Catapano goat cheese. 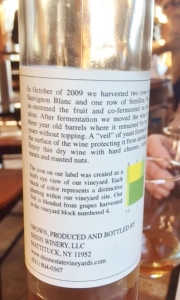 An explanation of the sherry and their label.

Why is sherry in quotation marks, I wonder?  Because it is not fortified, they can’t actually call it a sherry, we are told.  However, it does taste very like a medium dry sherry and smells like sherry, too.  Made from late harvest savoy, sauvignon blanc, and semillon grapes, it is fermented for so long that a “veil” forms on the top of the wine, hence the other part of the name.  19% alcohol, this would make a great aperitif.  I would drink it!  It has tastes of baked pear and a bit of oak, and would be perfect with some toasted almonds or manchego cheese. 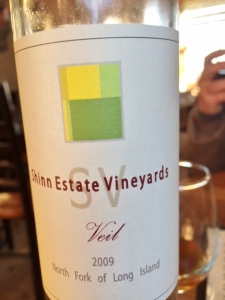 My husband admires the beautiful dark color of the wine, which seems to be typical of all their reds.  Not much aroma, he says, and a spicy tart taste, ending with black cherry.  Somewhat mono dimensional, he adds, with not much tannin and over the top on acid.  (Acid does not mean bad, remember!)

Always fun to compare different vintages of the same grape, we say, and our server agrees.  This merlot has more aroma than the 2012, with some notes of forest and wood, plus sweet cherry, with more tannin and less acid.  It would be good with a meat that was not too flavorful, like a filet mignon.

Say the second two words quickly and you’ll get the joke.  Yes, this is a Bordeaux blend, of 40% Merlot, 23% Cabernet Sauvignon, 17% Malbec, 15% Petit Verdot, and 5% Cabernet Franc, aged in oak for 20 months.  When my tasting buddy sniffs, he says he smells toast, which must come from the oak aging, plus some fruit.  Again, it has a beautiful dark color, but, he adds, it lacks gravitas.  If you compare it with a French Bordeaux, he says, you’ll say the French is better, but there’s nothing wrong with this.  It would pair well with a veal chop, since it does not have too much acid or body.

This has just been released, we are told, and again, this is a pleasant if not complex wine.  There’s “more at the end,” my husband notes, than the other reds.  Overall, I think the whites fare better than the reds.

We have some discussion about this additional taste ($7), since there are several “hard” liquor options to try, and settle on this brandy.  It is named for owner David Page’s maternal grandfather, who was a farmer/bootlegger in Wisconsin during Prohibition.  Since it is 86 proof, we are perfectly happy with the very small taste, which I give my companion first.  Mmm, mellow.  Smells like brandy, with some vegetable and wood aromas.  Dried fruit taste.  Warms the cockles (whatever those are) I say.  Doesn’t bite you back, says my pal. 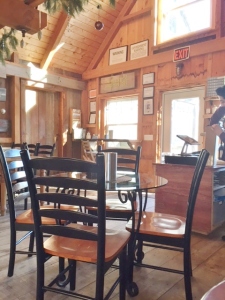 Another view of the room

Reasons to visit:  a chance to drive down a country road; the Sparkling Brut, Pinot Blanc, Wild Boar Doe, Veil “Sherry,” and Julius Drover Alembic Brandy; a winery that is quiet and relaxing; their use of wind and solar power and biodynamic farming (check out their web site for details); the chance to taste some types of drinks not made in other places, like the brandy, eau de vie, and “sherry.”  And do stop and get some mushrooms from East End Mushroom Company on Cox Lane: http://www.theeastendmushroomcompany.com/ .

Stop in to East End Mushroom and they’ll tell you all about how they grow their shrooms.

Signs like these line the walls of the tasting room.