We’d been watching the sign on Sound Avenue as it kept reading “Coming Soon,” so when we saw that Jamesport Farm Brewery, the newest brewery in town, was open for tastings, we wanted to check it out.  Then when visitors arrived at our house who appreciate both wine and beer, we knew it was time.  So off we went, up the bumpy road and past a somewhat misleading sign that seems to send you left when the tasting room is on the right.  The parking lot and surrounding area is still a work in progress, but the tasting room is quite ready for guests, and so is the expansive lawn outside, where children romped and groups clustered around umbrella tables with pints of beer.  A food truck offered lunch items, but we headed into the large room and sauntered up to the bar.  We were glad we had arrived early, since by the time we left there was a line for the bar. 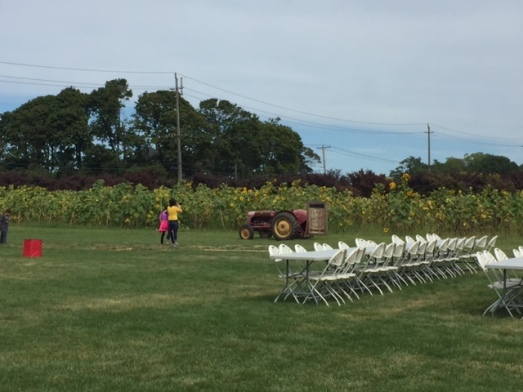 The menu on a large chalkboard offers seven different beers, plus a couple of ciders from Riverhead Cider House and a Palmer chardonnay.  A tasting of four is $10; pints are $6 each, and you can also refill your growler for $15 ($5 for the bottle).  We decided to get two tastings so we could try all the beers, with one member of the group preferring Captain Cook’s Razzmatazz for his choice.  That’s a raspberry-flavored cider that he liked but tastes to me like flavored children’s medicine.  In general, we liked the beers, but felt that they were somewhat ordinary.  A small brewery could take more chances with at least some of their brews.

Our server was enthusiastic and friendly, offering her opinions on our choices and suggesting an order in which to taste them which was not exactly the order on the board, and we felt she did a good job.  The beers list the alcohol content, which can vary quite a bit.  Each serving fills a small glass.  By the way, the word “farm” in the name of the brewery is not just for decoration:  many of the ingredients for the beers—and in some cases all the ingredients—are grown on the premises.  they grow hops and barley, among other ingredients.  You can take a tractor-drawn tour to check out the farm, $15 with a pint and $10 without one, and we saw a group heading out for one as we left.  Even the bar is built using locally sourced recycled materials!

An American pale ale made from 90% homegrown ingredients, this first choice was a not complex, light, slightly citrusy ale.  Our friend said she could see drinking it on the beach, as it would be a pleasant hot weather quaff.

One of the offerings in the gift shop.

With this blonde ale we had a difference of opinion.  Our friend said if she had a pint of this she wouldn’t finish it, while I liked its yeasty, honey, bready taste.  I opined that it would make “a good breakfast beer,” while she said it was not “beery” enough.

When we inquired as to the name, our server chuckled and said it fit with “the farm theme,” adding that this was a “smooth” IPA than the Northville, which we tasted next to it.  It uses all New York State-sourced ingredients.  We detected tastes of smoke and tobacco, and found it not as hoppy as one would expect from an IPA, and more like an ale.  Again, we had a difference of opinion, as I liked it more than my friend did.  However, she said she could see drinking it with braised beef, where its bitterness would complement the richness of the dish.

“Beer,” opined my friend, “should have a beery taste.”  And this one did, meeting with general approval as having a hoppy, grassy, citrusy taste.  She also said it reminded her of a Session ale.  Because it was brewed specially for the grand opening, it may not always be available.  Breweries do tend to vary their offerings by the season, and our server told us that their pumpkin ale would be arriving soon.  Of course. 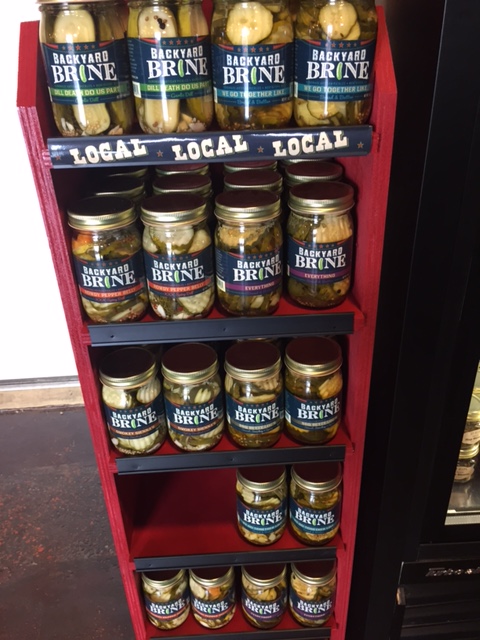 Our favorite local pickles: try “Dill Death do us Part.”

This is made by a different brewery which shares the premises with Jamesport, called Tweaking Frog.  We had a discussion over whether New York State would allow Tweaking Frog to use the word tweaking, since you’re not allowed to use names for alcoholic products which imply that they will affect your take on reality (or something like that).  In any event, this American Amber/Red ale is heavy on the yeast, with a slightly caramelized flavor, almost malty.  I like it and my friend didn’t dislike it.

Apparently, the ex-wife is bitter, because this is an “Extra Special Bitter,” also made by Tweaking Frog.  It does leave a bitter taste, but is surprisingly light for a bitter.  Our friend who is drinking the raspberry cider likes this one.

My favorite of the day, this is a Brown Ale that is sweet and dark, with a burnt toast aroma and chocolate flavor.  I prefer a heavier dark beer, like Guinness, but this would do.  If I were getting a pint, this is what I would choose. 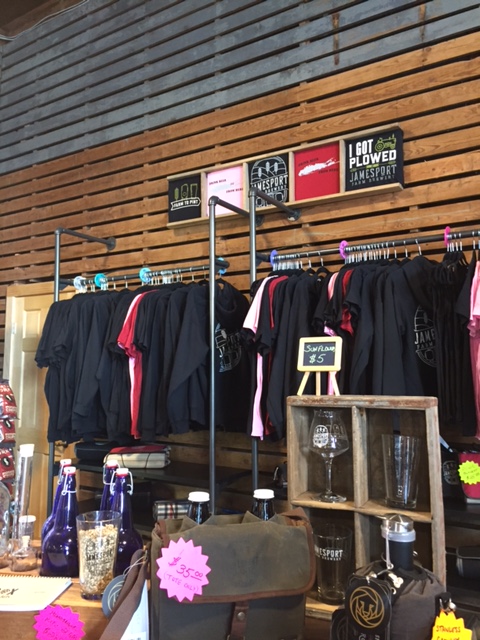 Reasons to visit:  you want to check out the new brewery in town; tractor tours; a pleasant place to hoist a pint, especially the outside area; you have dogs or children in tow; Greenport Harbor is full; the Northville IPA and the Barnswallow Brown, plus the Haybaler if it is a hot day; a nice gift shop where you can buy the equipment to make your own beer.

You can buy a kit and learn to make your own beer, but beware–many owners of breweries started this way!