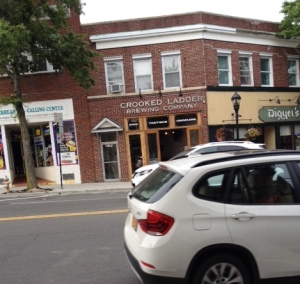 The Crooked Ladder Brewery is part of the scene on Main Street in Riverhead.

Eight tastes for $9.00—and by tastes they mean about a quarter of a glass—of freshly made craft beer (plus you get to keep the glass) qualifies as a good deal in my book.  We shared one tasting, and felt we’d had plenty to drink.  Downtown Riverhead is working hard at revitalization, with lots of interesting restaurant options, the New Suffolk Theater for live performances, and increasing numbers of formerly empty storefronts being filled, and part of that is the home of Crooked Ladder.   Located in a storefront on Main Street, the brewery has an attractively designed small tasting bar with stools in the front and a view of the beer making equipment in the back.  You may be able to find street parking, but if not, there are free lots behind the stores on both sides of the street.

When we entered we were given a menu of tastes which had information about each beer, which was fortunate as the server’s spiel was limited to, “Here’s the Kolsch.” The information included the ABV (Alcohol by Volume) and IBU (International Bittering Units) for each beer, which I’ve included in case this interests you.  Though the IBU measures the bitterness contributed by the hops, it doesn’t actually tell you how bitter the beer might taste, since the taste is a function of the balance among the various ingredients.  In addition to the tastes, you can also buy growlers, $20 for 64 ounces or $15 for 32 ounces, with a discount if you bring back the bottle for a refill.  At the bar with us were a large group of talkative guys who asked that the TV be tuned to ESPN and a pair of women quietly doing a tasting. 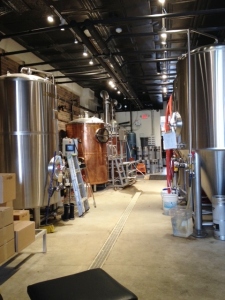 This is described on the menu as a German Ale, and it is a mild, fairly light beer, which would be fine on a hot day after working in the garden.  We felt it was pretty tasteless, a good choice for someone who doesn’t really like beer.  “Better than Coors Light, I suppose,” I said. 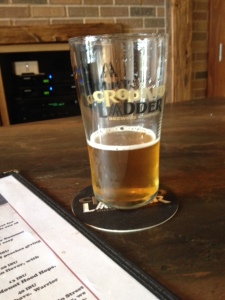 Summeritis is a fitting name for another fairly light-tasting beer made with “Crystal hops.”  It has a somewhat citrus/orange aroma and pleasant bitterness.

Another self-explanatory name—a wheat beer brewed with the addition of 40 pounds of peaches to each batch.  I don’t usually care for wheat beers, but this one is a pleasant drink, and also good to serve people who think they don’t like beer.  Slightly cloudy in the glass, it has a bit of peach smell and taste.  I could imagine sipping it while resting in a hammock on a hot summer day. 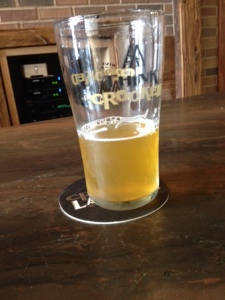 Note the faint cloudiness of the Peach Wheat–and also the generous serving!

So this name begged for an explanation, which was forthcoming from our server.  “It’s our flagship beer, “she told us, “the first one we made.  At the time we had no permanent home, and were roaming around, doing brewing in one place, bottling in another, tasting somewhere else.”  Hence Gypsy.  This is my favorite so far, a tasty ale with a reddish color, an aroma of spice and cocoa powder, and a good caramel flavor that would go well with burgers.

Why Four Day Weekend?  No idea, said the server.  This is described as an American Pale Ale, using Warrior, Simcoe, and Citra hops—and it is hoppy.  Now this one I really like.  I think it would be good with almost anything.  The aroma is somewhat flinty—wet iron I say—with an unusual and complex flavor.

Since the brewery is located at 70 West Main Street, the genesis of this name is fairly evident.  The notes inform us that four different varieties of hops go into this beer, plus some dry hops for another element.  Good balance of bitterness and flavor, this is another beer I could see buying.  Certainly we like it better than any beers at Long Ireland Brewery. 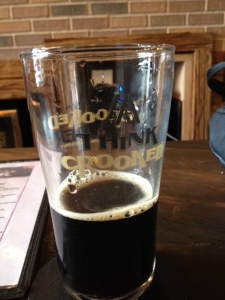 I tend to prefer dark beers, like this porter.

Named for a bridge that spans Shinnecock Bay, this porter transports us to an English pub.  If you like a dark beer, this is the one for you, with its tastes of somewhat sugary coffee balancing the bitterness of the hops.  Though I prefer Greenport Harbor’s Black Duck Porter, this one is also quite good. 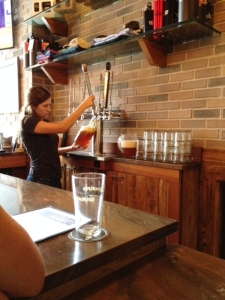 Reasons to visit:  you like craft beer; you’re interested in walking around Riverhead to see the progress that has been made in its revitalization; you have some time to kill before dinner or after lunch at one of Riverhead’s restaurants (We’re especially fond of the bison dishes at Tweed’s.) or after a visit to the Farmer’s Market on Saturday; the Gypsy Red, Four Day Weekend APA, 70 West IPA, and Ponquogue Porter.  Note that during the week they may be closed or may not open until 3 PM, so check the hours before you go. 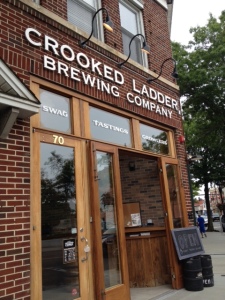