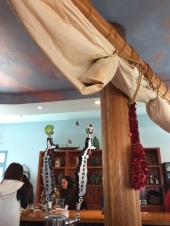 If you remember your Greek mythology, you will realize that the boat-shaped bar at Jason’s Vineyard is meant to evoke the famous ship, the Argo, on which the Argonauts, led by Jason, set out to find the Golden Fleece—not, as we once heard a guest guess, a pirate ship. 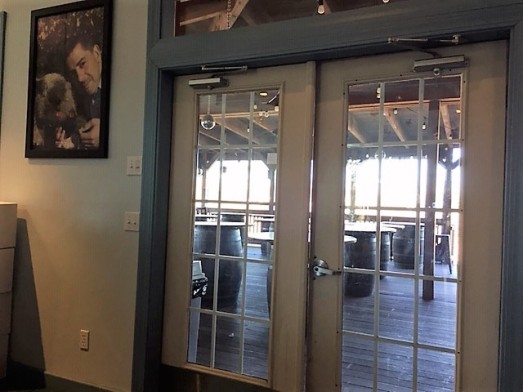 A view to the outdoor veranda and a portrait of Jason.

Jason was (he sadly died young, just a few years ago) a member of the Damianos family, whose other vineyards are Duck Walk and Pindar, which we reviewed recently.  We decided to check out Jason’s and make it a trifecta.  Having met and had a great chat with Jason, whom we ran into in a local store, back when he was planning to open this winery, we wanted to like it.  Though we were pleased by some of the wines, overall we found some of the same issues as with the other Damianos family wines, a tendency to over-sweetness and simplicity. 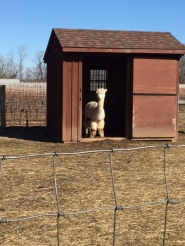 The tasting room is of average size, but they also have a plastic-sheeted veranda and an outdoor seating area for larger crowds in the summer.  The bar is surrounded by bar stools, so you can perch as you sip.  We observed one group nibbling on food they had clearly brought with them, and there are also a few snack items for sale.  In an outdoor enclosure we saw several sheep and alpacas, I suppose another reference to that famous fleece.

The menu offers five tastes for $15, and after some calculating we realized that we could do two tastings and try almost all of their wines.  You pay in advance and get a little pile of black “coins,” which the server collects as she pours each new taste.  The tastes, by the way, are quite generous, so that we found ourselves dumping those that didn’t delight with more frequency than usual.  They also have Greenport Harbor beer on tap.

The aroma of this steel-fermented wine is rather typically chardonnay-ish, with plenty of lemon and tropical smells.  The taste is also rather strong for a chard, and we decided it would go better with chicken than any sort of delicate seafood.

No that’s not water–our water glasses are in the back–that’s how light the sauvignon blanc is.

The first thing I noticed was the very light, almost watery color of the wine.  That turned out to be predictive of the taste, which I described as wine-flavored water.  Grassy aroma. 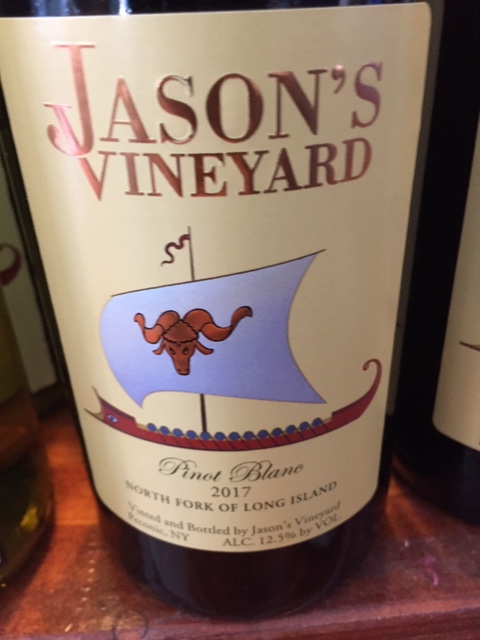 “Are they keeping the wine outside?” wondered my tasting buddy, as we tried to warm up the very cold glass so we could assess the wine.  On the other hand, we liked this the best so far.  Although the aroma is slightly chemical, the taste balances citrus with a sweeter fruitiness, perhaps guava.  This is a white you could have with pork chops.

Isn’t saying white riesling redundant, we asked our server, who chuckled and admitted she was equally baffled.  In this case, the chem lab aroma led to a taste we did not care for.  It was sweet, but with a bitter aftertaste, like honey being used to disguise medicine, as my mother used to do to give me aspirin when I was little. 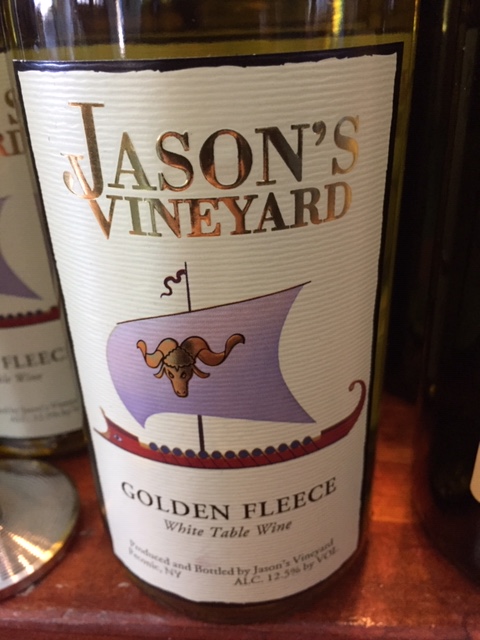 Given the name, we were not surprised to hear her describe this as their “signature white.”  It is a blend of chardonnay, seyval blanc, Cayuga, vidal blanc, and riesling.  Though she didn’t have any information on the proportions, she said it was predominantly chardonnay.  Having been forewarned that this was on the sweet side, we were pleasantly surprised to find that, although it did remind us of white grape juice mixed with tropical fruit and tangerines, it was not cloyingly sweet.  However, we did dump most of this and the previous taste. 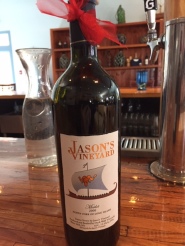 Our server poured this along with an “extra” of a taste of the 2000 Merlot, which they are offering for just $12 a bottle.  One sip and we knew why the low price—my husband described it as “if not over the hill, at least standing at the top and about to walk down.”  It smelled like forest floor and machine oil and tasted smoky and thin.  Which made the 2014 taste better.  It’s a typical North Fork merlot, with dominant cherry tastes and light tannins.  The extra, by the way, was not given to us because of the book, but according to the server is being given to everyone, so they are clearly looking to offload the 2000.  We dumped our taste.

We had hopes for this wine, as it smelled really good, of dark fruits, but the taste was very light, with no depth and not much fruit.  Dump.

This is an unusual blend for a red, of cabernet, merlot, and chardonnay, aged 24 months in French oak.  The aroma reminded me of Cheracol cough syrup, but the taste was not bad.  My husband described it as “not sophisticated, but tasty.”  A light red, it would be fine with pasta or, for a Greek meal, pastitsio.

We get some wet basement funkiness in the smell, but fortunately it tastes better than that.  Though it is not complex, we get some nice dark fruits and light tannins.  Dry and drinkable.  We decide it could go with barbeque, but for this level of wine we’d rather head to Vintage, our local liquor store, for one of their $12 bottles.

As we were deciding which wines to get, we hesitated between this and the rosé in order to total ten tastes.   Our server, seeing what we liked, steered us to this one, telling us that the rosé was on the sweet side.  This, of course, is sweet as well, comparable, she said to a port, with 19.5% alcohol, made from cabernet.  A good drink for a cold day, she suggested.  It does taste port-like, rather sweet, but, my husband opines, with no depth or gravitas.  We try it with the heart-shaped chocolates that are in a bowl in front of us, which does improve the experience.  I could see sipping this by the fire with a piece of chocolate cake.  Or maybe just the cake… 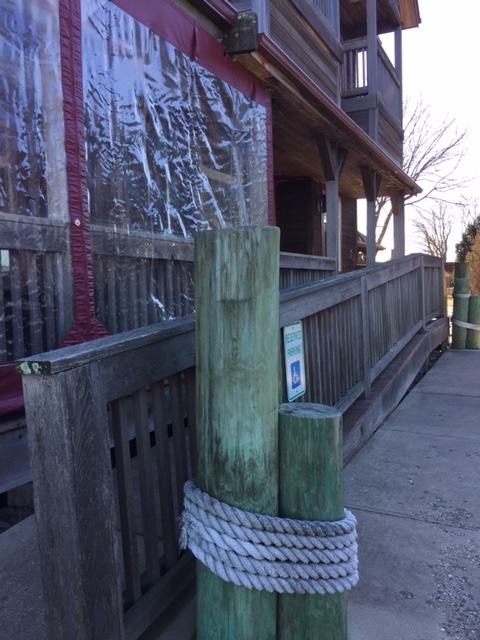 We noted the nautical theme even at the entrance.

Reasons to visit:  you like to visit the sheep and alpacas, though you are sternly warned not to feed them; very generous pour; you can bring your own snacks; the chardonnay, the Meritage, the malbec; the bar is cool; they also have the Absenthe, which we tried at Pindar. 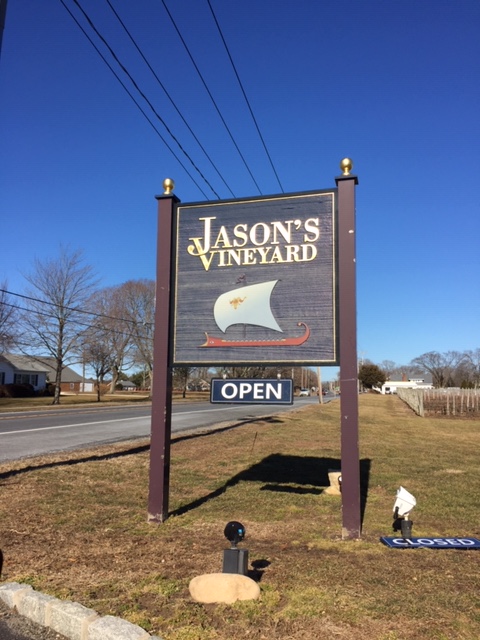