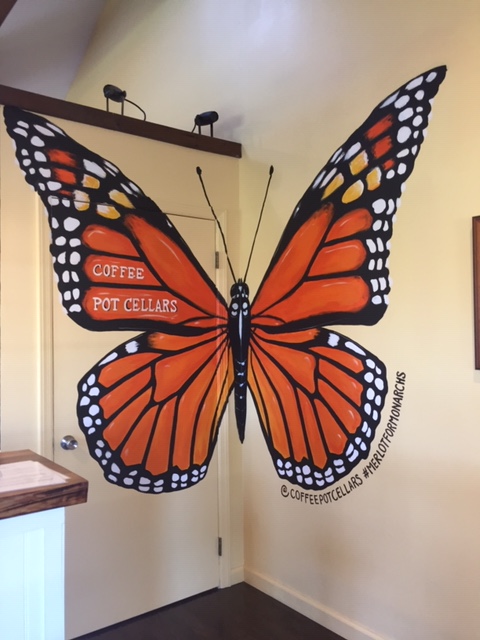 Why a huge mural of a monarch butterfly? Read the review and find out!

The name may seem a bit misleading—it refers to the nickname of the Orient Point lighthouse—but the building in which this winery is housed is totally appropriate. It is a house, and you will feel as though you are a guest in Laura Klahr’s living room as soon as you enter the intimate, yellow-walled space. 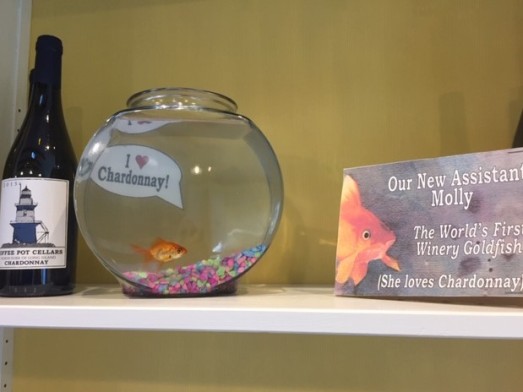 If you’ve ever been there before, she is likely to recognize you (even if you are not, as she and her husband, winemaker Adam Suprenant, figured out, a wine blogger like me). And even if you are visiting for the first time, you will get a warm welcome and soon feel at home, as you learn about Laura’s bee hives and Blossom Meadow farm, the delicious wines, and Beasley, the resident red-wine loving pug.  Beasley, by the way, has recently been joined by Molly, a chardonnay-sipping goldfish. (Never fear, the pets’ wine preferences are part of Laura’s quirky sense of humor.) 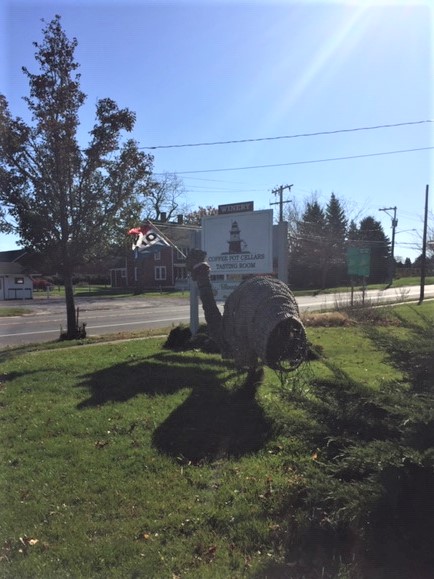 Out on the front lawn is the wine-o-saur, a dinosaur of wire “fleshed out” with wine corks, many of them contributed and decorated by fans of Coffee Pot. Laura promises to finish it, now that jam-making season is over. She also called our attention to a wall hanging made by her mother, which illustrates, using colored yarn, the daily temperatures in 2015. Other wall décor calls attention to the Merlot for Monarchs campaign, which teams up with the Girl Scouts and others to plant milkweed every time a bottle of merlot is bought—1,821 so far—which helps support the endangered monarch butterflies. We bought a bottle of the merlot, but not just because of the campaign. It’s good! 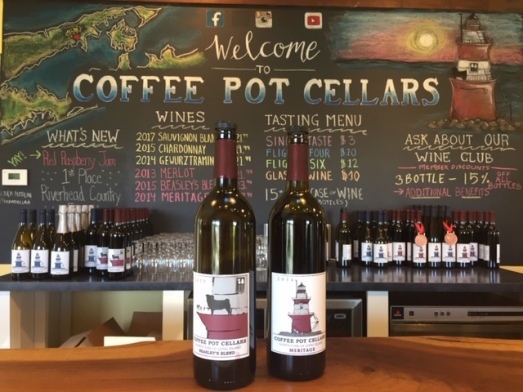 As we were discussing with Laura the phenomenon of people who are winemakers for large wineries—Adam is the winemaker for Osprey’s Dominion, whose wines we also like, and of which he is also proud—also having their own label, Adam entered, bearing what I bet was a lunch for his wife. He agreed that it is interesting, and they both talked about the benefit of having the freedom to do what you like. (There are other winemakers on the East End who do the same, like Anthony Nappa, who has his own label in the Winemaker’s Studio and is also the winemaker for Raphael, and Roman Roth, who makes the Grapes of Roth as well as Wölffer Estate wines.) For both their jams and their wines, Laura and Adam like to be “true to the fruit.” 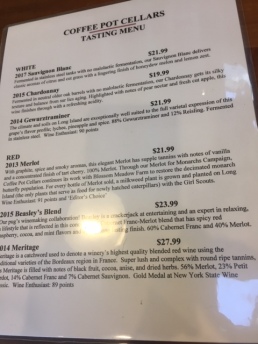 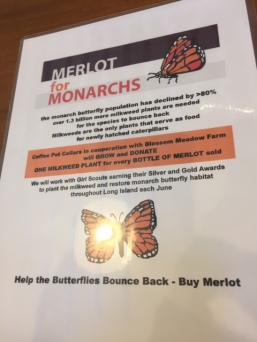 A complete tasting consists of all six wines for $12, so we opted to share one tasting. 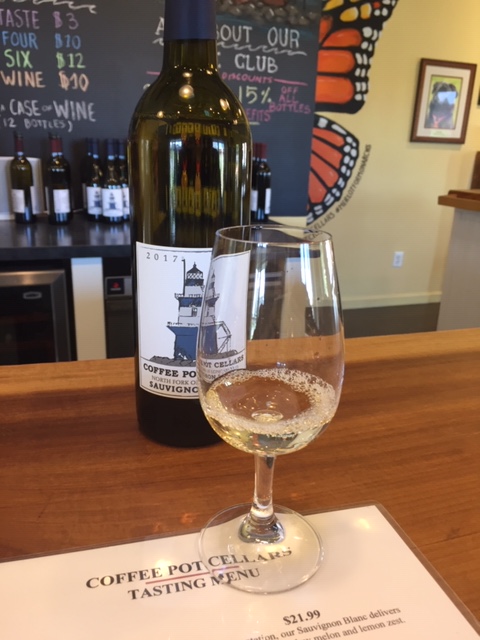 Laura explained that this is aged in steel barrels, rather than vats, which gives it a more concentrated flavor. When I opined that it was “zippy,” she smiled and said that was a word Adam would never use, but she liked it. This has a floral aroma, of honeysuckle and fresh-cut grass, and tastes lemony, with, as she noted, more depth of flavor than your typical sauvignon blanc. We buy a bottle. 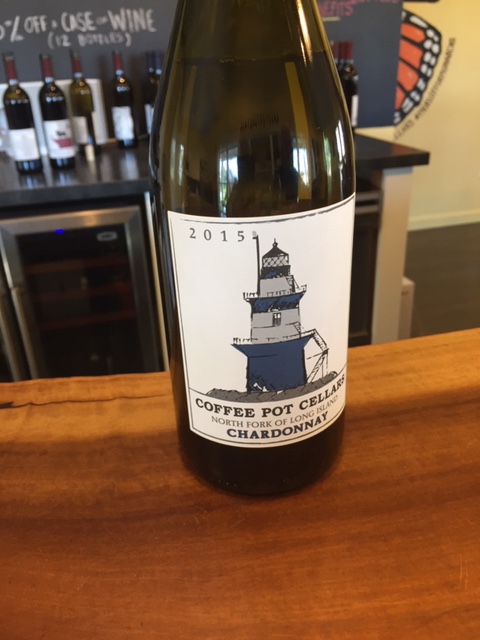 I wondered whether I would like this, since it is oaked, but after Laura explained that it is aged in fourteen-year-old oak for just six months, I was ready to taste it. She characterized it as their fall/winter chard, and I can see why. It has more body than a steel chard, but is not heavy or oaky or buttery. I taste wood and honey and citrus. They get most of their grapes, by the way, from a vineyard in Jamesport, plus some from other vineyards. 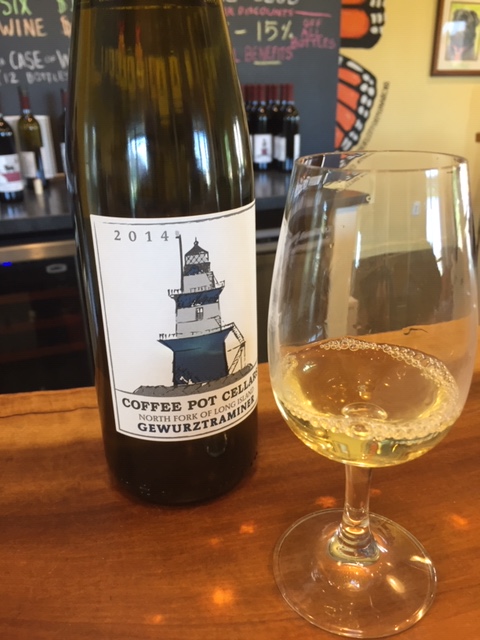 Gewürztraminer is a wine that becomes rather popular in November, since many people like it as an accompaniment to turkey. I can see that. This is a blend of gewürztraminer plus 12% riesling, steel fermented, and nicely fruity. My tasting buddy says it is sweet, but I disagree. What he sees as sweet I see as tropical fruit flavors. In fact, it even smells like lychee fruit. I also get pineapple and a touch of nutmeg. 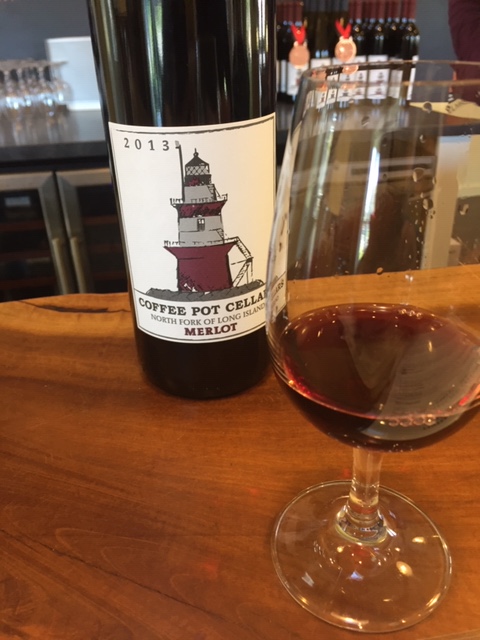 This is their newest release, and Laura proudly informs us that it just got 91 points and an Editor’s Choice award from Wine Enthusiast. I don’t give scores (as a retired English teacher, I am DONE giving grades), but I can see why this was highly rated. It has the cherry aroma and taste I have come to expect from North Fork merlots, but also more depth of flavor than many, with a touch of smokiness that is just enough to add interest. We buy a bottle, and not just to support the monarch butterflies. It’s delicious. 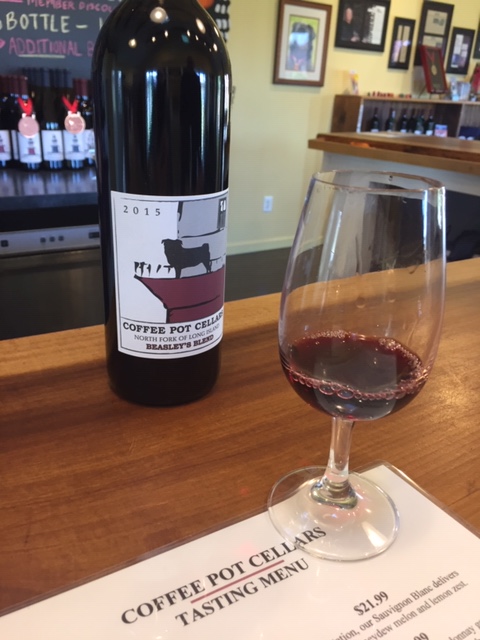 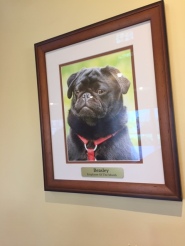 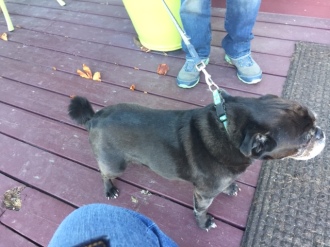 Beasley is featured on the label of this blend of 60% cabernet franc and 40% merlot, and he certainly has good taste. This has aromas of dark fruit and tobacco, with tastes of black raspberry and dark chocolate, plus enough tannins that I think it could age well. By this time Adam has joined us, and he agrees. 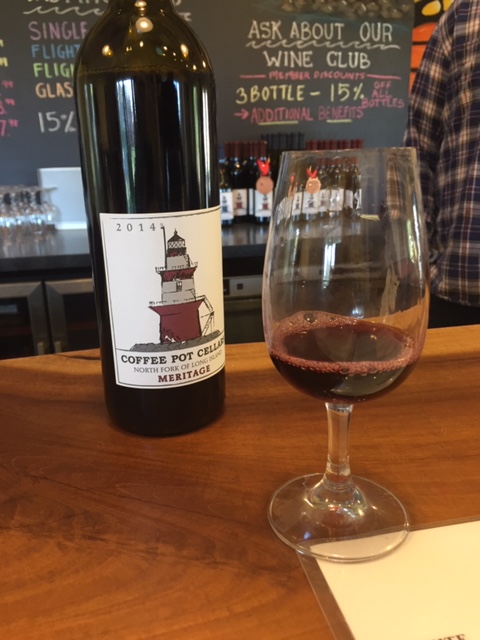 Adam tells us that he calls 2014 the “immaculate summer,” in that the weather was perfect for grape-growing, with cool nights and warm sunny days, and just the right amount of rain. Viticulture is, of course, farming, though those of us who just deal with the finished product don’t often think about that. (In fact, I think that might be the first time I’ve ever written that word!) He’s justly pleased with the way this blend has turned out, and we agree that it could also age well. We buy a bottle of this and label it to wait a couple of years in the cellar. He also discusses the use of petit verdot in this blend of 56% merlot, 23% petit verdot, 14% cabernet franc, and 7% cabernet sauvignon. It adds dark color and some blueberry flavor, he notes. This is another yummy wine, with aromas and flavors of dark fruits, like blackberries, plus cocoa and spice. 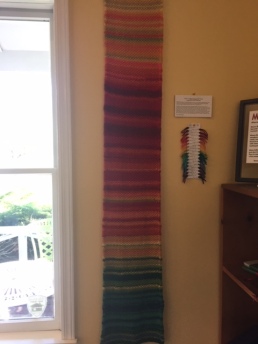 This wall hanging, made by Laura’s mother, shows the daily temperatures in 2015. 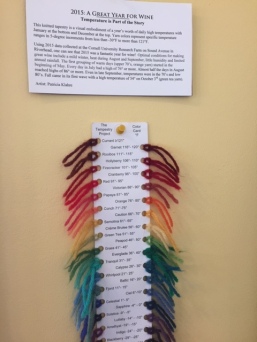 Reasons to visit: intimate atmosphere for tasting, with personal attention; Laura; all six wines, but especially the sauvignon blanc, the merlot (save the monarchs!), and the Meritage; Beasley, the official greeter and employee of the month; jam and honey and other bee-related products for sale. Laura also described to us the fun of a honey tasting, where you put out several varieties of honey and taste the differences amongst them, since honey gets its flavor from the flowers the bees visit. I do have one suggestion: perhaps at some point in the future they could replace the bar stools with more comfortable seating options. 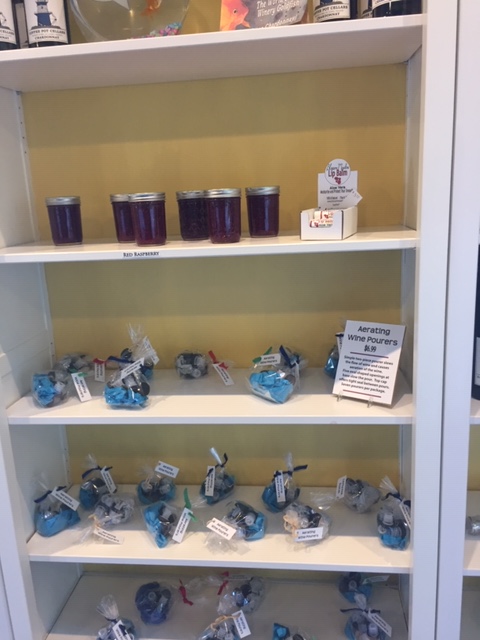