In many ways, September is the best month on the North Fork, and our guests agreed.  We had gone for a walk to Love Lane and a swim in the Peconic Bay, and now we were seated on the attractive patio of Lieb Cellars on Oregon Road, gazing out at beautiful farm fields.  Later we planned to barbeque chicken from 8 Hands, plus eggplant and zucchini and corn from a farm stand.  Perhaps we could cap off that menu with a bottle of wine from Lieb.  However, we didn’t find any wine that we wanted to take home for that meal. 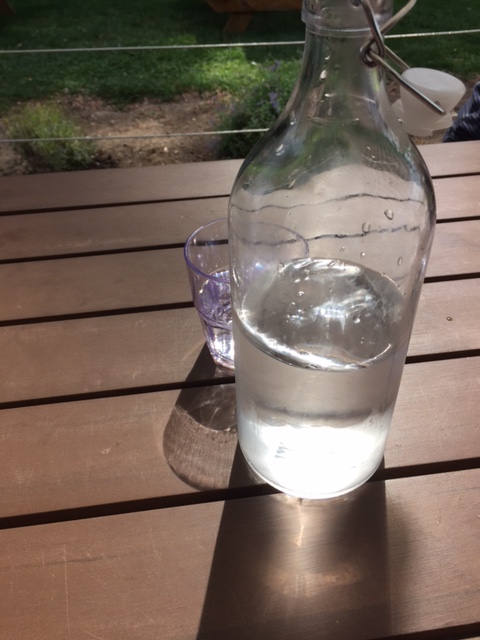 It was a warm day, so we appreciated the bottle of cool water we were given.

On the other hand, we enjoyed our tasting, if not so much the wines themselves, which was brought to us on trays so we could sit and sip and discuss and enjoy the lovely setting.  The very enthusiastic and well-informed server, a young man who is really studying wine, gave us a quick (maybe too quick!) rundown on the wines we had ordered, and then left us to ourselves, just checking back periodically to see if we had any questions. 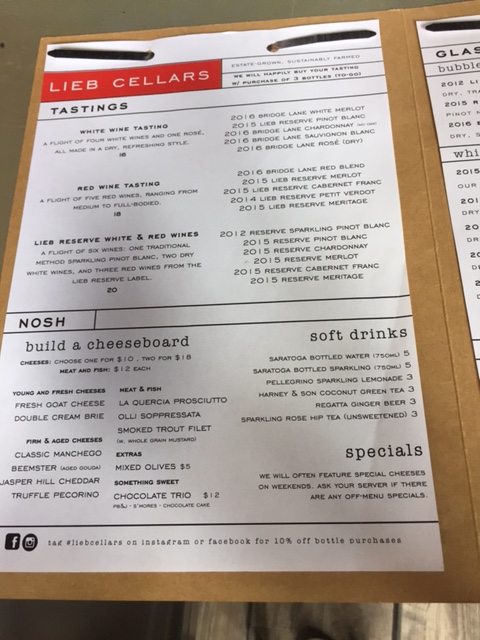 The menu includes snacks, plus drinks for your designated driver.

The menu offers three options:  four whites plus the rosé for $16, five reds for $18, or six Reserve wines for $20.  You can also get cheese and charcuterie plates, but we knew we had a lovely selection of cheeses from the Love Lane Cheese Shop waiting for us at home, so we opted not to get anything.  They don’t allow you to bring your own food, but they do permit dogs on the outside patio.  We decided to share one white flight and one red flight.  The good-sized servings came out in attractive round-bottomed glasses, and we also were given a bottle of chilled water plus glasses for the water.  Some of the wines are labeled Bridge Lane and others Lieb Reserve, which I abbreviate BL and LR. 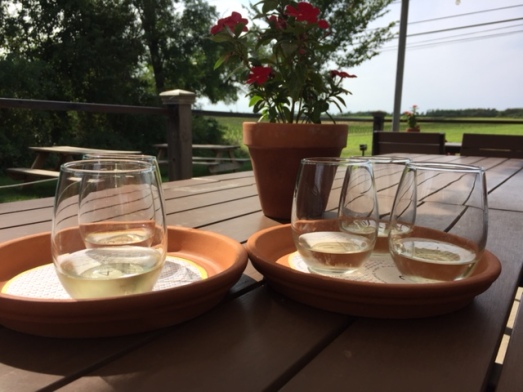 The whites and the rose. Each glass sits on a coaster which identifies the wine and the order in which to drink them.

This is a white wine made from merlot grapes by not giving them any time on the skins.  The aroma was nice—sweet, spicy, a bit minerally—but we found the wine itself lacked character.

They are very proud of their Pinot Blanc, but we were underwhelmed.  It is very citrusy and tart, with not much fruit and a slightly chemical aroma.

We liked the patio, which we had to ourselves on this mid-week day. One time we arrived on a weekend and had to leave, as it was full.

We like this the best of the whites, finding it had a better balance than the others, with some richness.  I liked it.  It has a honeysuckle aroma and nice lemony notes.  It would go well with food, though we felt it would not stand up to the spicy barbeque sauce we planned.

Our server cautioned us that this was not like a New Zealand sauvignon blanc.  It was not at all floral, and my brother pronounced it “tame.”  It smells almost like candy, with some minerality, and the taste is very light, almost evanescent.

Pink?  Not so much.  Another very light wine, this had no strawberry aroma.  It is available in an eight gallon box.

Our server was very proud that he could inform us this was like a right bank Bordeaux, a blend of 44% merlot, 22% cabernet franc, 13% petit verdot, 12% malbec, and 9% cabernet sauvignon.  You can sense in the taste that this spent a little time in oak—six months.  It’s very soft, with a taste in which cherry predominates.  I said it was okay for casual drinking, but my brother opined it was “completely uninteresting, like a person without a face.”  Ouch.

Note the dogs in the background.

As we sipped this somewhat classic merlot, we got into a humorous discussion of the movie Sideways, and the damage it did to merlot sales.  Nothing wrong with a good merlot, I said, but my brother felt this was a “Kool-Aid version of merlot.”  Well, it would be fine with a burger.

I thought this cabernet franc was not bad, with dark fruit tastes of blackberry and plum, dry, with some tannins though overall rather soft.  But I had to agree with my brother that it had no depth.

The Petit Verdot looks as good as it tastes.

Finally, a wine we could agree on.  We all liked the petit verdot, made of 98% petit verdot and 2% “mystery grapes,” according to our server.   2014 was a hot season, so it was a good year for ripe red grapes.  This wine is interesting, with a distinctive earthy, piney aroma and layers of flavor.  We speculated that another brother would like it, since he favors “odd duck” wines.  Long finish.  If I were to sit and have a glass of wine here, this is the one I would get.

And here is their left bank Bordeaux style:  47% cabernet sauvignon, 30% merlot, 17% cabernet franc, 4% petit verdot, and 2% malbec.  We made our server check the math!  It worked out.  The aroma is fruity, the taste less so.  Given the tannins, it may age into something better, but for the moment it is a bit disappointing for the price.  It would be okay as a $12 wine, opined my brother.  Well, that’s a problem with North Fork wineries in general—because of the small size of their production, they can’t achieve the economies of scale from other places.  Nevertheless, we like to support the local wineries.

The inside room is attractive and comfortable.

Reasons to visit:  beautiful setting on a back road, surrounded by farm fields; the Unoaked Chardonnay, the Lieb Reserve Petit Verdot; you can bring your dog. 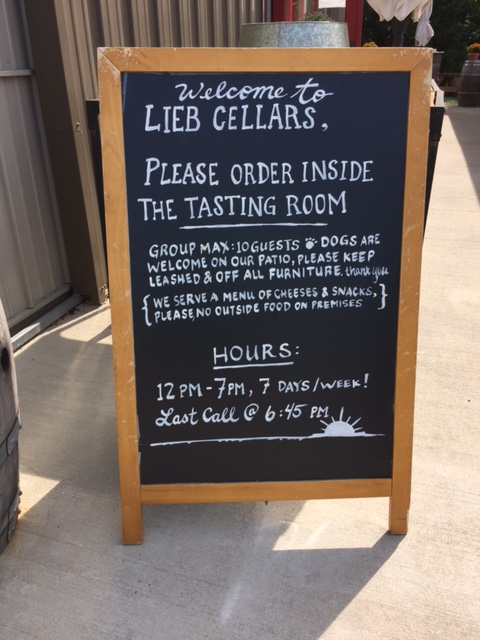